The Miracle of Steamed Wing Quills 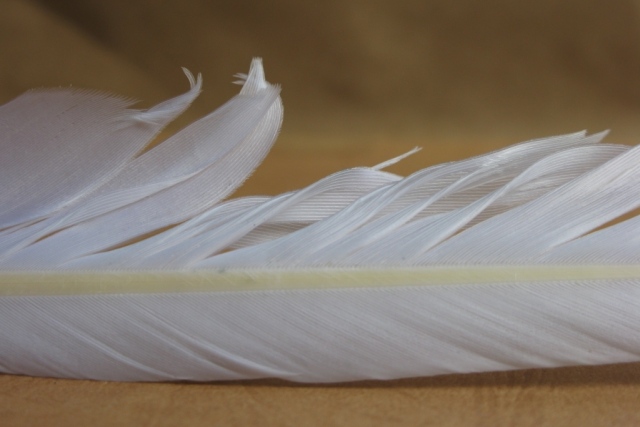 Close-up image of the same feather - you can clearly see the creases, and folds. Not in fly tying condition for sure.

I have been recently steaming duck and goose wing quills. Those of you that have never previously heard of this or done it, you are about to be enlightened. I took these before and after photos of the same feather, in this case, a left white domestic goose wing quill. Upon inspection once out of the bag, I could see there was no damage to the quill barbs, but in the “before” image, you can see the creases, bends, folds, separations, and wrinkles. By all appearances this feather is dog chew-toy material, or one you might saturate with catnip for you-know-who. It is certainly not a quality fly tying feather. Or is it? 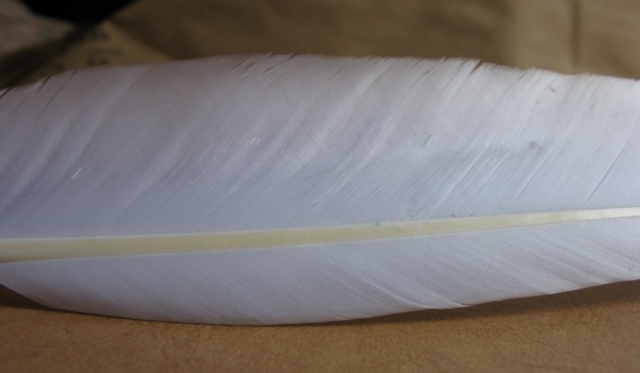 This is the same feather - after steaming. Something about the combination of heat, vapor, and moisture does something good to improve and in some cases, totally rejuvenate and fully restore foul fowl wing quill feathers. What is miraculous about this, is that once the steam hits the barbs, you can sometimes see them moving, turning back toward their original orientation, as if they are alive. It reminds me of the way a flower follows the sun throughout the day.

Behold the miracle of steaming. Take a simple teakettle, bring the water to a boil, and hold the feather section over the opening, allowing the steam to flow over the barbs in the affected sections for a few seconds. Make a few strokes with your fingers pinched gently together to reposition and realign the barbs, marrying them back together in the state nature intended them to be. You may need to do a few more seconds of steaming, and presto! Perfection! From garbage. Now that is a miracle. All it takes is a little effort. It may take up to ten seconds of steaming in stubborn areas.

Macro image of the same feather section. As you can see, in the initial photos, this wing quill was an apparently damaged, defective wing quill, but it has been restored to perfection by steaming. This feather is now suitable for tying even exhibition quality trout and salmon flies. In the package this feather would seem to be unsuitable for fly tying. It takes a trained eye to recognize a diamond in the rough, in other words, being able to see and analyze wing quills that are disheveled but undamaged, as opposed to those that actually have defects such as stress marks, broken barbs, and insect damage. A good fly shop should allow you to open packages if necessary - carefully - for inspection prior to purchase.