Last weekend at the Marlborough, Massachusetts Fly Fishing Show, I had the opportunity to meet David Footer, noted taxidermist and artist from Maine. While not a fly tier, David originated the Footer Special in 1962, and had a friend tie it for him. I first saw it in Trolling Flies for Trout and Salmon, 1982, by Dick Stewart and Bob Leeman. It was interesting in our conversation, when I mentioned that title to Mr. Footer, he informed me that book was where the pattern was first published. I loved its colors so much at first sight, and I had enjoyed tying, fishing, and selling this pattern for years to the point that I included it in my DVD, Traditional Streamers and Bucktails, 2007. Here is the link to MyFlies.com and my product page for this DVD:

David has been an artist and taxidermist for over sixty years. He met and was influenced by Herbie Welch when he was 21 years of age. A very interesting and entertaining story is on the David Footer web site:  http://davidfooter.com/?page_id=239

I have seen and recognized Mr. Footer at various shows for years but I never had the privilege of meeting him until last weekend. It was a pleasure to meet him. Below is a photo of David and me taken at the show.

The creation of the Footer Special occurred similarly to the origin of the Supervisor, Lady Doctor, and Warden’s Worry, created by Maine Warden Joseph Stickney, who was also not a fly tier, but envisioned his patterns and had them dressed for him by fly tiers who were his friends. 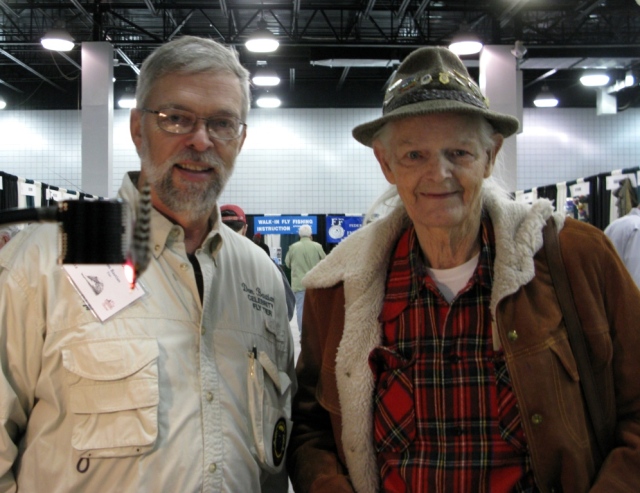 Don Bastian and David Footer. Note the streamer fly hanging on my McKenzie Bright Light; the pattern is a Carrie Stevens Pink Lady; the head cement is drying. David has been a licensed taxidermist since 1946 and is recognized for his fish mounts and old fish mount restorations as one of the best in his field.

8 comments on “David Footer and the Footer Special”