My earlier post today about fly tying weekends at my family cabin was partly occupied with my diligent work on these flies. This is the Carrie Stevens pattern – Shang’s Favorite.

Shoulder: Duck breast feather dyed red (I used chicken – Whiting American Hen Cape). Nice and rounded, and I had the benefit of selecting them from the “file cabinet” of the cape.

Below are some more photos of the Shang’s Favorite in mixed hook sizes: 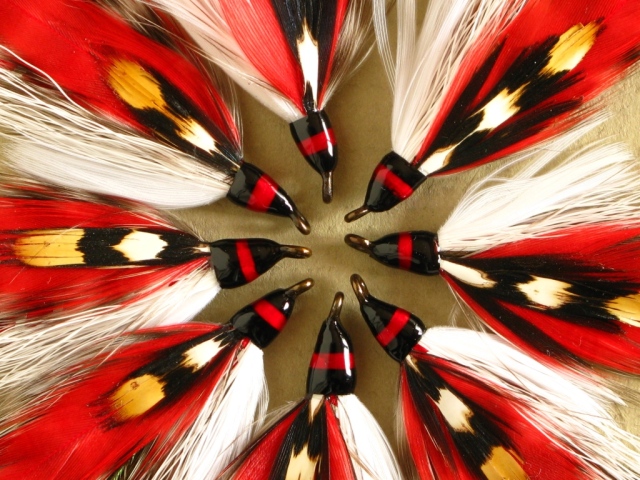 Shang's Favorite streamers - Heads, shoulders, and cheeks...I believe the use of the banded head is a tribute to and in honor of Carrie Stevens, designating the patterns as being her original creations.

These streamers were all made by assembling the complete wings, shoulders, and cheeks ahead of time. I prefer Elmer’s rubber cement for this. You can use it from the bottle without letting it sit, thereby avoiding the “wait” before you can begin having the fun and excitement (really!) of wing assembly a la Stevens style. When I started these I didn’t make plan to make eight because I knew, or thought I knew, I was not going to make that many. I started with three sets of wings. As noted in my earlier post today, I got on a roll. Glad I have them made, my inventory is in a bit better condition. At least on this item…

The additional Steven’s patterns named after Charles E. “Shang” Wheeler, the Shang’s Special and Charles E. Wheeler will follow along behind these flies, eight of each of those patterns too. These are the first sets of this series in the numbered collector’s editions Carrie Stevens streamers that are I am placing on my selling page of MyFlies.com: http://www.myflies.com/

This Collector’s Set No. 2 featuring the flies named after Charles E. “Shang” Wheeler are currently listed on MyFlies.com.

I returned home yesterday afternoon after spending time at my family cabin with a couple friends for a long winter weekend. While we did not actually take any photos during our fly tying session last weekend, here are a couple photos from our January outing, taken by a friend with his new camera, during the last weekend of the Pennsylvania muzzle loader deer season on January 14th. We had seven guys in camp then, with three gunners, meaning they own the appropriate firearm and have the permit to legally harvest a deer. One of them killed a doe on Saturday afternoon, which means more venison!

My fly tying that weekend was focused on tying replicas of antique fishing flies to sell to fly collectors at shows. Specifically, I was tying snelled wet flies on blind-eye hooks. I used Favorite Flies and Their Histories, 1892, by Mary Orvis Marbury as a reference source. The photos show my friend Truman, and me in the foreground, at our drop-down fly tying station. My paternal grandfather, whom I never knew, because he passed in 1946 before I was born, bought this property around 1915. It has been in my family ever since. I plan to photograph and add some pictures and recipes of the flies I tied during that weekend to this post later today.

This immediate past fly tying weekend, I was working on my next set of Carrie Stevens Collectors Edition streamer flies. This next set features the three patterns named after businessman / fly tier / decoy carver / story-teller Charles E. Wheeler, including his official namesake pattern the Charles E. Wheeler, along with Shang’s Favorite, and Shang’s Special. I have three of those sets already sold, and as I tied them in order, I figured to make a couple extra sets, and then I got on a roll and I made a total of eight sets – 24 streamers; three patterns, eight of each pattern. I will post them here today as well. 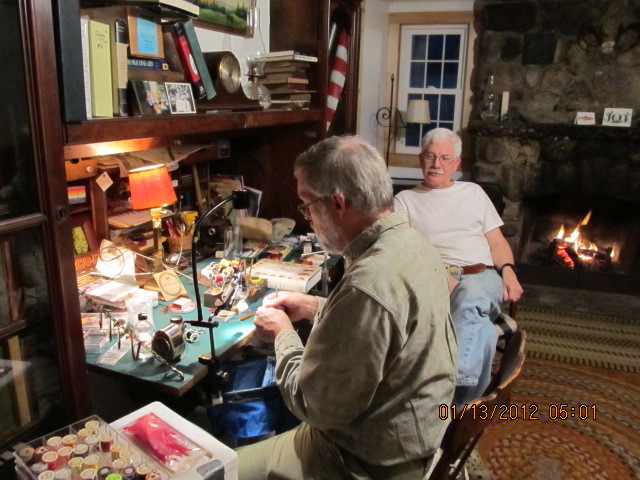 Don Bastian - foreground - and Truman McMullan tying flies at the Bastian Cabin. Photo by some guy who doesn't want his name on the internet. Lots of details and memories in the background; the small black and white photograph on the shelf to the left of the clock is my brother, Larry, and me in the garden at the Bastian Funeral Home in Williamsport, Pennsylvania, taken by my Aunt Freddie in 1964. That is the year we both started tying flies...my grandfather custom built - modified this cabinet / shelf / desk / bookshelf into and along the wall. The American Flag in the far side gun case is a pre-1958 48-Star Flag. For those of you too young to remember, or if you didn't pay attention in history class, that was before Alaska and Hawaii were admitted into "The Union." We still fly that flag on holidays. The clock is older than I am by a couple decades, and still keeps perfect time, and the Westminster chimes ring true. Note the Carrie Stevens streamers hanging up to dry on the support chain...

Another version of the photo above; note I have something in my mouth - my friends would say, there's always something in my mouth - FOOD! You know how your "friends" can tease...I am biting the tip of the silk gut leader material to flatten it prior to tying it to the hook. This flattens it and makes it wrap more smoothly and blend into the body of the fly.