My friend Bert reminded me yesterday through a friendly comment – tease he made (see A Word of Thanks – March 9th) about me getting older; Bert noted my memory is going because I had forgotten to complete the promise to provide information for a technique I had developed for creating nice bronze mallard wings as in the photo of the Yellow Dun, pictured below. He is partly right, I did forget, sometimes, but when I did remember I always seemed to be in the midst of another task. So my neglect of this matter was part of the reason I failed to follow up after a weekend of fly tying classes to post the technique behind the wing on this fly. I apologize for making everyone wait so long. I wrote of using just one bronze mallard feather to make the wing on this Yellow Dun. This post was originally made in early October of 2011, and I had promised to complete the information when I got back from my weekend classes at Great Feathers Fly Shop in Sparks, Maryland. http://greatfeathers.com/

Here is the permalink to the initial Bronze Mallard Wings post:

Below is the original photo of the Yellow Dun: 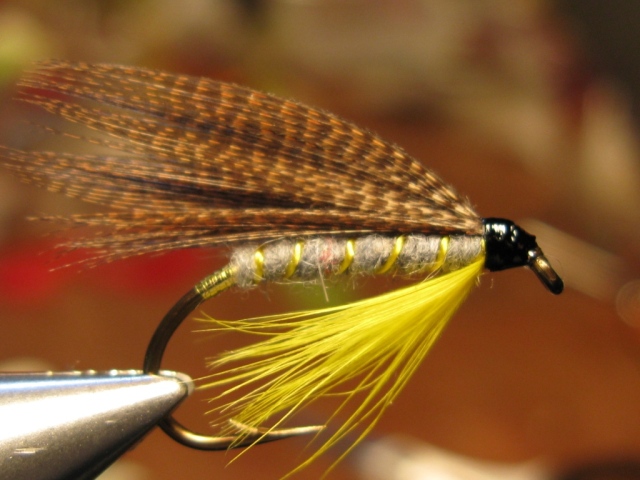 This photo of the Yellow Dun was taken immediately after I finished the fly, the single coat of head cement I had applied was still soaking in, as I grabbed my camera and took the shot hand-held. That is the reason why this head is not finished off as I normally do on presentation flies. This is a size #6 vintage Mustad 3399 sproat bend wet fly hook.

Now on to the explanation for making this wing:

Bronze mallard feathers, called brown mallard in the old days, come from mature mallard duck drakes. The older birds yield the best quality feathers. They are large side feathers with a dark brown and black speckled coloration, very beautiful. Due to the location of the feathers on the birds, there are few center feathers; most of the really large quills are either ‘rights’ or ‘lefts.’ Meaning that the useable portion of the barbs is suited to right hand or left hand use for our tying, though salmon fly tiers often use a single, long section of bronze mallard folded over the top of some flies as a ‘roof.’ I have for years, normally matched right and left hand feathers for brown mallard winged wet flies, and paired each side together in much the same manner as you do when using matched duck or goose wing quills.

What I did for this wing in October was this: First, stand the barbs out a bit more from the stem than what the natural alignment is – you need to get the ends of the barbs fairly straight and even, so there is little difference in the length across the section of feather. This has to be performed gently. Next, for a size #6 hook, cut a section about one-quarter to three-eighths of an inch, fold it in half, then tie it to the hook with two and only two wraps, using a pinch wrap. Cut off the butt ends. Two wraps minimizes thread build up – make these two wraps tight, they will do their work. To maintain tension you can snub the tip of your bobbin right up to the bottom of the hook shank, this also stops the bobbin from spinning counterclockwise which flattens, or removes the twist from your thread. That is another topic. Then repeat this process by cutting another section the same width as the first; fold that in half and with another pinch wrap, tie it in right on top of the first section. Again two wraps, and cut off butt ends again. This produces so far, a stacked wing. With large bronze mallard feathers, there should still be one more section of usable barbs a quarter to three-eights of an inch in width remaining on the stem.

The section immediately below was added to my post in response to kelly’s question; her question made me rethink my explanation in an attempt to make it more concise.

By standing the barbs out, I mean to slightly realign them by grasping a section with your fingertips, much the same way you stand barbs out when preparing to detach schlappen or hen hackle fibers for a bunched false hackle or beard-style throat. On the bronze mallard, you do this in the same plane as the feather stem and barbs are naturally in, but if you pull a section of the tips of the barbs slightly away from the tip end of the whole feather, you’ll see that the ends of the individual barbs become more evenly aligned. This is what you want.

Take this last section of barbs, cut them from the stem – and by the way, any and all times you cut, cut, not pull or strip off, barbs from feather stems, whether from wing quills, goose shoulder, turkey tail feathers, peacock, etc., you always, always, cut perpendicular to the directional length of the barbs. And I mean perfectly perpendicular. This allows for the best assessment and correct, astute judgement of proportion as to “how wide do I need to make this wing?” Cutting perpendicular to the barb stems permits us to make the most accurate estimate of measurement for wings, etc. I never ‘measure’ the width of my wings other than visually in accordance to the size hook I am tying on. From experience of tying, I know how wide to cut a section of quill relative for the size hook I am tying on. This same familiarity of materials and proportions allows a dry fly tier to judge correct hackle size by visual recognition alone, and not need to rely on the use of a hackle gauge.

My friend Joe Cordeiro of Pembrooke, Massachusetts – associated with saltwater Flat Wing Streamers – and I were discussing this yesterday. Joe took my wet fly and streamer class on February 26th at The Bear’s Den in Taunton, Massachusetts. Joe was telling me how he is suddenly all fired up and excited about tying wet flies. This is partly because he booked a trip to Lakewood Camps in Maine, on the Rapid River this June, and is busily tying some classic patterns in preparation for his trip. We discussed this necessity of cutting perpendicular to the barbs, and I told him how many times when I teach a class, occasionally providing wing quills to the students, and when they are returned, that the variety of cuts are, well, often inconsistent to say the least. Some cuts are almost parallel to the stems, even after I explained and demonstrated the proper technique. Joe reminded me of what I have stated many times: When equal width sections of barbs are repeatedly cut from a pair of wing quills for #6 or any other size hooks, the remains of the cut butt ends on the quills should look like the profile view of perfectly constructed stair steps. I have a pair of turkey feathers around here that would graphically illustrate and clarify my point on this, and if I can find them, I’ll take and post a photo to illustrate my point. And I promise not to make you all wait another five months for this information. 😉

Anyway, I digressed a little bit, but sometimes conversations go like that, in response to a comment made, or mere mention of something can spark further, in-depth discourse on a particular topic. And when you are talking (or writing) to yourself, even though you are writing for others to read, this can happen as your mind adds various elements of thought. In this case, the digression was highly relevant to the material I am presenting.

So to finish the wing: The last section of bronze mallard is not folded prior to tying it in. With the bobbin hand or right hand, bring this section into position on top of the wing, align the tip ends for proper length by holding it above the wing on the hook. Then take your opposite hand, the one you don’t normally wind your bobbin with – for most of us that would be our left hand, and carefully begin to fold this section over the top edge of the previously mounted portion of the wing. Try to position this section so that there are equal widths of barbs on both sides of the wing, as you lower the butt end of the top piece. At this point, the left hand thumb and middle finger (my preference) or index finger pinches the wing and a normal pinch wrap is made with the bobbin, making five or six wraps. Cut off the butt ends and finish the head with a nice uniform shape and taper.

So the wing is made by folding and stacking the first two sections. By doing them separately in two sections instead of all at once, the wing gains more substantial width. This first, two-stage portion of the wing is tied in ‘stacked,’ after being folded before the thread wraps are made. The third and final section is folded over and on top of the first part of the wing, kind of like an umbrella, giving a uniform spread of barbs over the folded / stacked part of the wing underneath it. The third section is not stacked but rather folded over the top of the under wing. When the fold is made of this top section, care should be taken to keep the bottom edges of the section aligned with the top of the head, and not be permitted to envelope over or slide down along the sides of the hook shank. The final section is placed with the bottom edges resting on the butt ends of the under wing. The top edge of this section will be above the hook, and is compressed by the wraps when tied in.

I hope this explanation is clear; by all means if any if you see me at any upcoming events, I will be happy to demonstrate this technique. And it also works with gray mallard, teal, widgeon, etc.