A week ago Thursday my close friend, Truman, “TG” McMullan and I went to my family cabin for a three-day fly tying visit. We planned to hang out, relax, cook our own meals, and tie flies. We tended the fireplace and set up our fly tying stuff on the drop-down desk top that my grandfather and local undertaker, Romain F. Bastian, custom-built into the wall of the fireplace and living room area. TG and I have done this often enough that we’re kinda of set in our ways, at least regarding where we set up and sit; I’m always on the left. The desktop has a dark green felt covering that was cemented on long before my time. The edge provides for perfect clamping of our vises, there are electric outlets at desk height, and a small desk lamp provides general lighting, which during daylight tying hours, is quite enough. And as you can see, there is plenty of room to “expand” our work area. Before dawn (yes a few times I started at 6:15 AM, at least applying additional coats of head cement as soon as I poured my first cup of coffee), and after dark we also use the ceiling light.

The photo below was an early morning photo in natural light to catch the ambiance of the fireplace as we savored our first cup of coffee. At that moment of the day, right then, there is nothing better in life.

I'm seated at left, my friend, TG is on the right.

Truman was tying wet flies in preparation for our return trip to the Moosehead Lake Region of Maine this coming September. A group of us are booked into Wilson Pond Camps, just a few miles from Greenville. TG and I love to go float tubing. This method of fishing is often a complete get-away from other anglers, considering that the popular rivers in the area, particularly the Roach River, can get a bit over crowded. We have spent the day on a pond more than once without seeing another angler. And for those of you that have never tried a float tube, consider this: fishing from a float tube is like fishing from a Lazy-Boy Recliner. I fell in love with it my first time, remaining skeptical to the last, even as I put on my flippers. Over the three-full days we were there, TG tied 91 wet flies, pictured below:

The photo is not the greatest because we had no tripod, and it was hand-held under natural light. I apologize for the less than stellar clarity photo, but I hope you get the idea. Lined up from left to right, top row: Beatrice, King of the Waters (palmered hackle), Black Gnat, Cahill, Cardinal, Rich Widow. Bottom: McGinty, Queen of the Waters, Alder, Katydid, Iron Blue Dun, Cowdung (wingless because TG lacked the cinnamon color duck quills), and the Rube Wood. These are fishing flies, with one coat of head cement, ready for the water.

I went intent on working on Carrie Stevens streamer patterns, in preparation for the introduction of the next two Collector’s Edition Sets that I am creating. I actually made up the two prototypes for these sets, and had time to spare so I started on more, finishing seven additional streamers besides the seven flies I wanted to finish for the next two sets. The photo below was a Saturday morning shot of my work station.

Completed wing assembly on the left for Don’s Delight; in the center some prepared hackles for wings in progress await the assembly line. On the right lined up on my tool block: Rapid River, Larry’s Special, Larry, Lakewood, General MacArthur, Casablanca, America, and the Victory, all size #4 – 8x long. Two more of the Victory in smaller sizes are in between the larger size repeated foursome in size #1 – 8x long – the General MacArthur, Victory, Casablanca, and America.

I tied some of these streamer patterns by selecting the wing components and assembling them in advance. On some of them, and it seemed to run like this in sets, I made the bodies first, including the belly, throat, and underwing, leaving the only remaining task to be the attachment of the wings.

We had a great time. TG brought home-made bread and rolls, we grilled venison burgers, made customized Reubens and Rachaels for lunch, ham and cheese omelets, scrambled eggs, pancakes, sausage, thick custom-sliced slab bacon from the local market, grilled chicken salad, pasta with chicken and vegetables, fresh-ground coffee every morning, and enough beer and wine to enhance our meals and camaraderie. We don’t always eat like this. We also watched a few movies and took walks in the woods with Abigail, my Cocker Spaniel.

The photo below features the four patterns Carrie Stevens created for her series of patriotic flies during World War II: 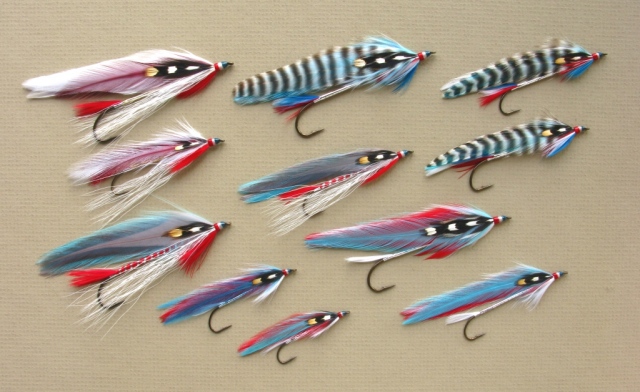 The photo below is of eleven additional patterns: 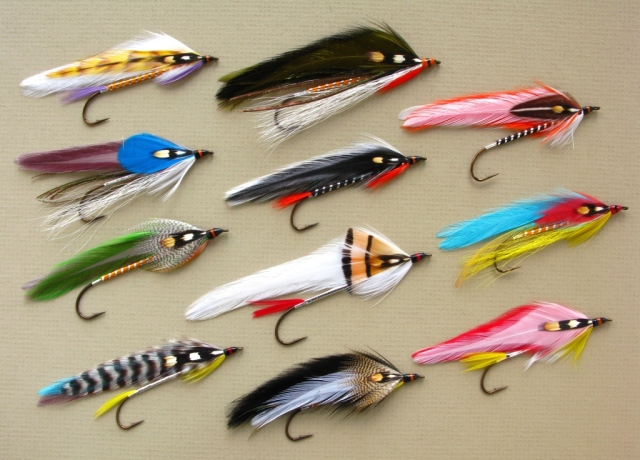 The streamer flies were all tied at the cabin, but I had to finish them with coats of head cement after I returned home. I am developing three different themes for these sets of flies. These streamers are dressed on Gaelic Supreme Hooks, all sizes #1 and 2 – 8x long.

As added enjoyment, on Sunday afternoon we saw eleven deer in three groups; Monday morning from the house, a group of ten paraded across a grass lane and about fifteen minutes later four more crossed the woods lane to the rear of the house. All in all, it was a good weekend, and it is really great to have a close friend to share these experiences with. Truman and I had so much fun that he says we need to do this next year, at least three or four times. I’m up for that.