There’s an old saying that I’ve heard folks say ever since I was a kid. Here it is: “When the cat’s away, the mice will play.” My version of this regarding a recent experience goes like this: “When the fisherman is away, the dog will play.” At least that’s how it sometimes goes.

I have a number of fly tying and dog stories that are mine or those of friends, stashed into a project I started three years ago. This project is the writing of  short humorous stories, accounts, and tales of various fishing and hunting experiences that I’ve had over lo, these many years. When the idea started I thought I’d have about thirty topics, but the list has swelled to nearly ninety at present. Seven chapters are finished. My plan is to publish these stories in a two or three volume set. But today, I need to write something; I am so far behind in my blog posts.

Since late April I’ve fished a number of times. The seven trips I have made to Spring Creek have thus far resulted in me hooking over 160 trout, a pretty good per-trip average of twenty-some fish. Two of them were days when I hooked close to forty. May 17th, while fishing nearby Big Pine Creek with two friends, I had the best day I’ve ever had there. I netted fifteen nice rainbows, all save one from nymphing heavy water riffles with four split-shot and a two-fly rig, five to eight feet under the indicator. I haven’t done that in a number of years, and it was refreshing and exhilarating to find out how much I love fishing like that. Hey, they weren’t rising, and a “Bugger” produced only one trout, so the tactic of nymphing is generally what works best under these conditions. I capped the day off with two big browns in the evening on a dry; a Slate Drake Extended Body Dun pattern of my own design. This pattern and several other Slate Drakes will soon be available for sale directly from me. You can post a comment here, which will give me your e-mail address, and from there I can contact you about placing an order.

Over Memorial Day weekend after my May 25th class at L. L. Bean, I fished in Maine with my brother, Larry, and my niece, Emily, for stripers, successfully. I have photos of all these excursions that I’d like to post. So far it’s been a good season. I’d love to fish more, but I am still backed up with fly tying orders, and then there’s the yard work both at home and the cabin.

On the earlier mentioned May 17th trip, I departed the house around 8:30 AM to meet my New Jersey friends at McConnell’s Country Store and Fly Shop in Waterville. http://www.mcconnellscountrystore.com/

Our friend Dave Rothrock was working in the shop and we chatted with him a bit, ordered sandwiches from the deli for lunch, and headed up to the Delayed Harvest Area below Slate Run. This post is about what happened when I returned home. The Pine Creek fishing story will be posted separately. For now I am writing about Abigail, my ten-year old Cocker Spaniel. She was a surprise gift from my wife Lou Anne, on my 50th birthday in 2002. On May 17th, she was “the dog that played while the fisherman was away.” 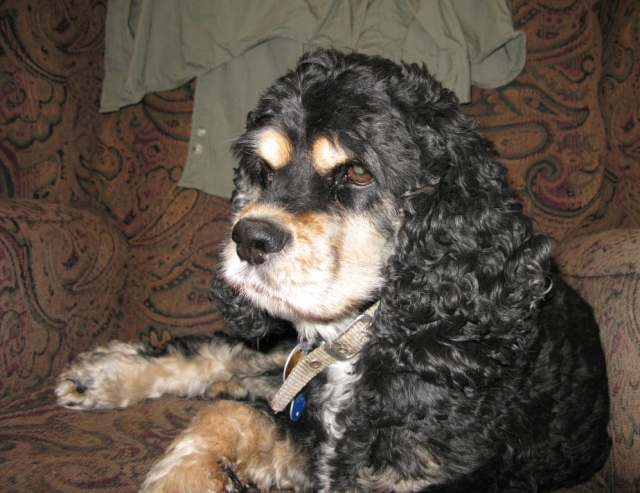 Abigail – companion, bird dog, comic actor, well-disciplined, mild-mannered, generally well-behaved dog. I love her more than any of the four dogs I owned. She’s just as cute as she can be.

My day of fishing on May 17th started out with me intending to stop and head home mid-afternoon to take care of a few things, one of which was mowing the lawn. Another was to receive and deposit in the bank a check that I had been expecting. I decided to stay and fish. Excellent choice. The check could wait (turned out it did not arrive anyway), and the mowing was no worse the next day. Abigail had the house to herself for over twelve-plus hours that I was away. She’s normally out several times a day, but when Lou Anne was living and worked full time, and if I traveled or guided, Abigail was often in the house for up to eleven hours. She was well-housebroken and there was never an incident, but we had learned to keep the trash containers out of her reach. She loved to get after facial tissue and especially, used napkins that might have a trace of food or other “intersting” aroma embedded in them. On occasion she would pull twenty or thirty feet of toilet paper off the roll. Otherwise, she’s always been a great pet; gentle, sweet, playful, great with my grandsons, and very good afield hunting grouse and woodcock.

A handful of times over the years she got into my fly tying stuff, though never causing a major catastrophe. Once she got hold of a 1/2 ounce bundle of schlappen, and even though Lou Anne was in the room with her at the time, she was occupied on the computer. When I walked in after the bundle was “separated” I asked Lou Anne why she didn’t stop her. She of course thought that Abigail was simply playing with one of her chew toys. Another time recently I heard Abigail chewing on something as I sat tying flies. For about minute I heard but did not pay attention to what she was doing, again, thinking she had her Nylabone. When I looked down, Abigail was right beside me on the floor, calmly tearing the nails off a jungle cock cape. I was instantly horrrified. She doesn’t eat the feathers, she just wants the skin. It’s the bird dog equivalent of beef jerky. I of course intervened to save the cape, and I now regret that my immediate dismay prevented me from the presence of mind to take a macro photo of her head, because she had about a dozen jungle cock nails clinging to her lips. That would have actually been very funny – in hindsight.

Abigail sleeps in bed with me, tucked up against my torso because she’s always been a lover and craves affection. When I returned home from fishing all day about 9:30 PM, I was up for only about fifteen minutes. I was pretty exhausted after fishing most of the day, being on my feet and wading the heavy riffs for a good nine hours. At 4:00 AM I was awakened by the sounds of Abigail retching and, well, without further details, she coughed up something. I was in REM sleep, and this was not welcomed. Not at all. I got out of bed, turned on the light, squinting in a half-daze at this slimy, four-inch long slug of broken feathers and quill stems on the comforter. Curious, because normally if she was into my fly tying stuff, I would see it right away. I knew she had gotten into some feathers, but there had been no evidence that she had disturbed anything. I cleaned it up with paper towels and we both went back to sleep.

It was not until I had my coffee the next morning and had been up for a couple hours when I located the scene of the crime on my living room floor, carefully hidden from view behind the coffee table.

See, Abigail is a good dog – disciplined to come, sit, stay, and she even posed for this mug shot. Since she is the only animal residing at my house, she was guilty as charged, the result of circumstantial evidence. This is the remains of a packaged pair of mallard wing quills. Feathers scattered about. What was gone without a trace were the wing bones that held any remaining sinew of dried flesh, tendons, and of course, that disgusting flavorful goodness that dogs love. My first inclination was to gather everything up and trash it, but when I started to pick the feathers up, I noticed that she had not really chewed most of them and they were still useable.

This set of wings was bought by me at The Bear’s Den in Taunton, Massachusetts, on February 25th when I taught a class there. I demonstrated to the class how to select, cut, and remove the individual right and left primary wing feathers to pair them up for the wet flies we were tying, so all the prime quills had been removed. Probably 80% of these feathers were salvageable.

Sorted mallard wing feathers, courtesy of Abigail, my Cocker Spaniel. At upper left are the gray, white, and black-tipped coverts used to tie wings on the 19th Century Orvis Bass fly, the Cheney. There are gray coverts for spoon wings on the Henshall and Mather. On the right are the long-barbed center quills that can be married easily with goose shoulder for married wing flies, and a few pairs of slate wing quills. And of course, a nice lot of practically unscathed dark blue, white-tipped quills for the McGinty, Good Evening, or the tips for the paired, whole-feather wing on the Hummingbird.

Abigail actually did me a favor, and the only downside of her behavior was a little tummy ache.

Today is June 3rd. Friday was overcast all day. Yesterday the sun poked out for less than a couple hours all day. Today it’s foggy and cloudy, and the sun is struggling desperately to gain a foothold on this summer day. All the while as I was typing this post, my fingers got cold. There’s a chill in the house with the outdoor temperature in the upper 50’s overnight, and it’s kind of damp. I can’t believe I just built a fire in the wood stove… but it is already providing a very welcome feeling of warmth and comfort.

More good news: The cooler weather and recent rains have kept Big Pine Creek cold and very fishable. I am definitely going to get over there and fish this coming week. There are still Slate Drakes, caddis, and olives hatching.

11 comments on “When the Fisherman is Away”