I’ve already fielded several questions from my readers on my Lady Killer post:  https://donbastianwetflies.wordpress.com/2012/06/07/lady-killer/  and have tried to explain to the best of my ability, my technique of using a mini-version of Warren Duncan’s floss body “keeper” technique to help secure the rear of floss bodies on streamers and wet flies. It will be a while until I can shoot, edit, and post a video, so I went for the next best thing: a step-by-step photo tutorial. I just finished it. It was done quickly, on a fly in progress in less than ten minutes as I was working on another Carrie Stevens pattern, the Artula. I’ll just comment on each photo in the steps. Hopefully this will clarify the method somewhat.

Those of you that have taken a class from me in the last year-and-a-half have been exposed to this trick on wet fly bodies. I have been teaching the use of a body-length floss keeper on wet flies, as New Brunswick fly tier Warren Duncan employed on his floss body patterns, before his untimely passing in 2007, which occurred at his vise while working on a commercial fly order. I have yet to teach this method for floss bodies on streamers. The reasons are described in the photos on the Lady Killer post. Here are the instructions, quickly photographed as I stated; my camera was hand-held, and I futzed with the lighting and shutter speeds until I got something suitably decent. Due to the orange and digital camera automatic color reading they aren’t the best. But hopefully they are clear enough to present the steps and procedure with clarity. 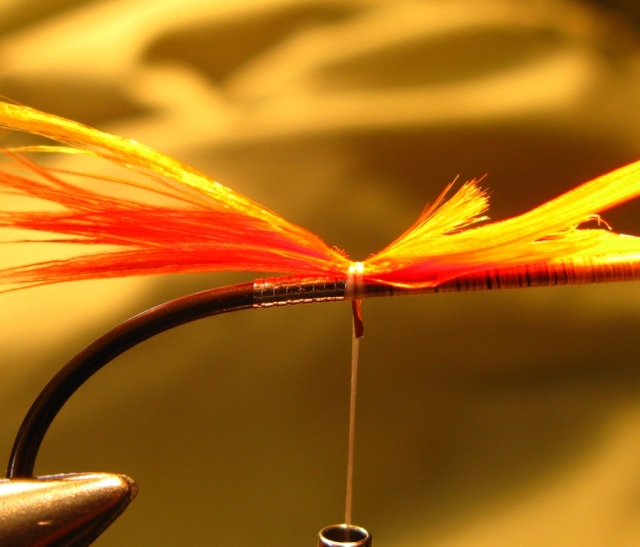 Step 1: Tag and tail are set and secure. Only one wrap is used to secure the tail before adding the keeper. The “keeper,” two short strands of Danville’s No. 7 orange floss have been tied in with two wraps of the working thread, Danville’s 3/0 monocord. The funky lighting and automatic camera lens default settings interaction makes the floss and tail look yellow. You can see the clipped butt of the tinsel tag. The next step is to advance the tying thread to the front of the shank where 4 strands of floss 12″ to 13″ long for the body are attached with a top pinch wrap. The working thread is then wrapped back over the floss as it is held taut, lashing it to the top of the hook shank. Return thread to rear of body as in next photo. 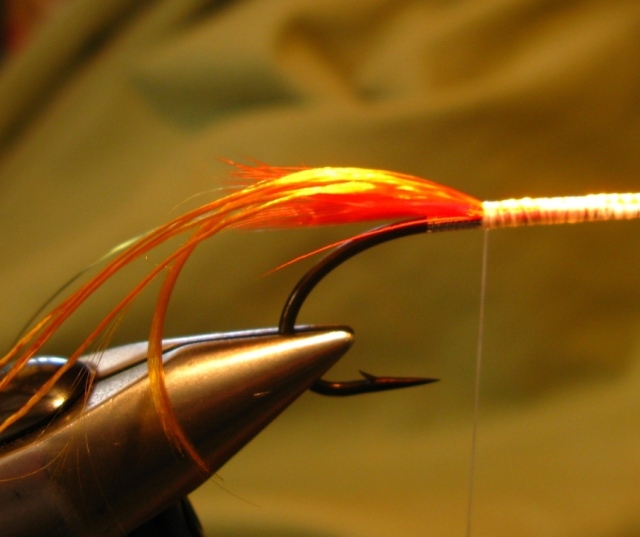 Step 2: Working thread has been returned to the rear of the body, lashing the floss to the shank after being attached at the head. The body floss has been securely tied in. The tinsel ribbing has also been tied in. With no photo, proceed with the next step by advancing the tying thread to the head. I stop winding to spin my bobbin counterclockwise a few times as I go to keep the thread flat. You’ll note I used open wraps of the thread to get forward quickly.

When wrapping floss fly bodies, the most important part, and the most critical point in the process to achieve good results, is to properly start your first wraps. By nature of its multiple strands, floss cannot be attached at one small point on the shank of the hook. To accurately describe this, envision the circumference of the hook shank compared to a 360-degree circle. The floss cannot be attached at one narrow spot where it may only occupy 5 degrees or less of the hook shank surface. About the minimum we can expect is 25% coverage. 40% to 70% is the norm.

When any stranded fly tying material separates during winding, whether it is peacock herl, antron yarn, or floss, the reason this occurs is because uniform tension is not being maintained on all the fibers. Floss is most difficult of stranded fly tying body materials to get under control. It must be properly setup before the first wrap in completed. If this is not done, then the problem of separation of fibers only exacerbates as you continue.

First, elevate the floss perpendicular to the hook shank. Then using both hands, employ a thumb and finger tip stroking action, alternating from right to left hand as you do this. This action tightens the fibers. Then, while continuing the two-handed stroking action, begin to advance the floss, all the while still using both hands, stroking the floss as the wrap is advanced; three o’clock, five o’clock, 6, 7, 8 o’clock positions about the hook shank.

You only need to be concerned with, and concentrate on two-and-a-half to three inches of the floss fibers, because that is the portion that is actually wound and wrapped about the shank of the hook. If tying a wet fly using six inches of floss, or a streamer using twelve to fifteen inches of floss, the procedure remains the same.

If you elevate the floss perpendicular and do not gain proper tight tension of every last strand, then what happens is, remember the percentage of the hook shank covered by the attached floss, the fibers on the leading edge will sag, while the fibers on the trailing will tighten.The floss fibers that occupy the space between the leading edge and trailing edge all do this to a varying degree relative to their placement in the floss bundle on the hook shank.

What you must do! Tighten all the floss fibers before you being to wrap, , then simply advance the floss, continuing the two-handed thumb and finger stroking on just three inches of floss to maintain uniform tension of all the fibers, and this is very important for you to understand, it bears repeating:  maintain uniform tension of all the fibers as the tension of each individual fiber relative to the tie-in point on the hook shank changes during the initial rotation. It is unnecessary to stroke the entire length of the floss being used.

Your goal is to set up the floss, before winding begins, so that all the fibers are uniformly tight against shank of the hook, before you begin to wrap. I guarantee, if this is properly done as instructed, you will easily wind the floss smoothly and with no separation. Floss generally is wound by placing the first complete wrap on the shank, then each subsequent wrap is made by advancing the floss, placing 1/2 its width on top of the previous wrap, the front 1/2 onto the thread underbody.

If a tapered body, larger in front is desired, then decrease the pace of your advance. The more the floss is “held back” it begins to add bulk to itself.

Step 3: Two forward wraps have been made with the body floss. The keeper still hangs off to the rear. Hackle pliers grip the floss to hold it taut while I took the photo. Are you with me so far? The next step is to bring the keeper forward over the two established wraps of the body floss.

Step 4: The two short “keeper strands” of floss have been pulled forward; you can see they have formed a tiny shell back. Next, after making a partial wrap with the floss, switch your grasp on the floss to your left hand (opposite or right hand for your lefties). But just enough to trap the keeper forward. Grasp and pull the keeper taut with your right hand and then complete the third wrap with the body floss. It is when pulled forward in this manner, that the keeper adds more coverage to the floss body over the circumference of the hook shank at the rear of the body. This produces an additional gripping effect on the floss that secures it with more coverage than what is normally done by the ribbing alone. Carefully advance the floss forward, and try to maintain the keeper strands on the top of the hook shank.

Step 5: The body floss has been advanced about 2/3 of the way forward. You can see the butt ends of the two keeper stands protruding from the front of the body wraps. Continue wrapping the floss forward to complete the body. Sorry the photo is a little blurry. I stopped at The Trail Inn for a pint of Guinness on the way home from the bank. Actually the beer wasn’t the reason…you can blame the klutzy photographer. 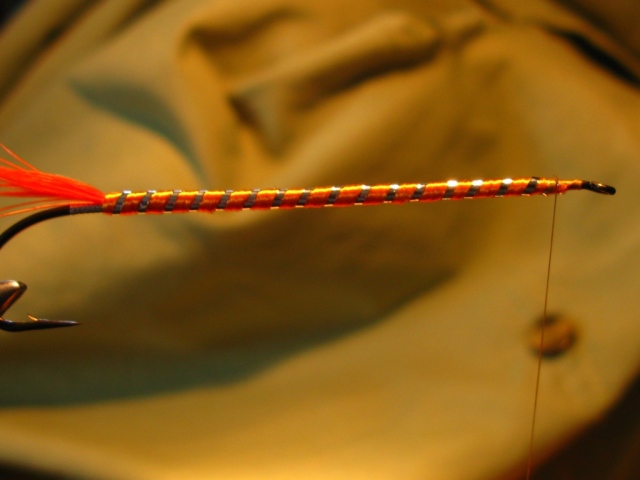 Step 6: The finishing thread for the head, Danville’s No. 7 Orange Flymaster 6/0 has replaced the white monocord. The ribbing has been wound. Carrie Stevens made her ribbing wraps rather close together, so on an 8x long hook, to adhere to her style, I’ll make 14 – 16 wraps. This hook is a #1 – 8x.

Once you have reached this stage you can secure the thread and start another body, or move on to attaching the belly, throat, and wing assembly to complete the fly. I hope these instructions clear the waters. Have fun!