I just received my invitation to participate in the 22nd Annual International Fly Tying Symposium the other day. The dates are November 17 and 18, 2012. In the package there was also the usual fly donation request for the beautiful frame that Ted Patlen, fly tier and fly framer extraordinaire of Lodi, New Jersey, puts together each year as a raffle item to raise funds for kids fly tying programs. The deadline for fly submissions is September 10th.

Rather than procrastinate as I occasionally do, I pondered, “What to tie and send to Ted?” Not too long though actually. Initially I thought about sending Ted an already tied Parmacheene Belle, the Henry Wells version, a la 19th Century original recipe, of which I have eight or ten in sizes #2, #4, and #6 lying around. But within minutes my thoughts turned to Carrie Stevens and one of her beautiful patterns. Besides, I did announce here some time ago that I would be eventually starting a Carrie Stevens Pattern Dictionary anyway. So why not start now? To begin with I created a new blog Category – Carrie Stevens Pattern Dictionary. For the first fly I chose a pattern that I had not previously tied, wanting to add to my portfolio of experience tying her patterns. Hence the Lady Killer:

Wing: Two yellow hackles flanked on each side by one white hackle

Note: as per a photo of a Carrie Stevens original Lady Killer in the Hilyard Carrie Stevens book, 2000, the band sections are listed from the rear of the head forward to the eye.

You’ll note that I also used narrow tinsel for the tag and wider for the ribbing. If a pattern lacks a tail, then I use the same  section of tinsel for both tag and ribbing, winding both at once after the body is completed. While I was at it I tied two, one for Ted and one for me. 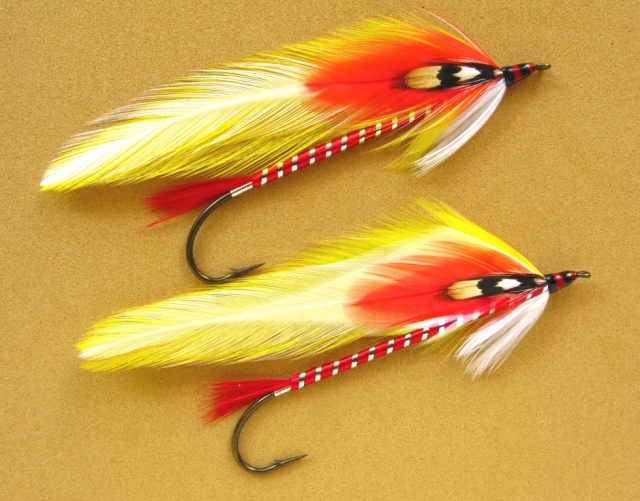 I took a macro of the rear end of the body: 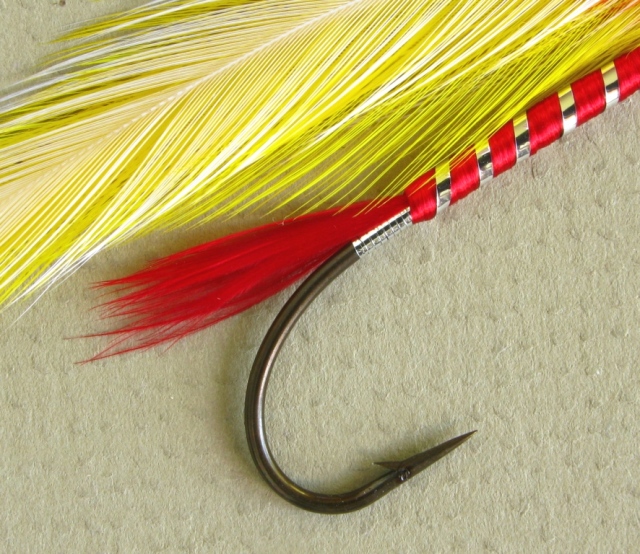 Lady Killer – macro of rear of body area.
A little over a year ago, I started to adopt Warren Duncan’s pull-over floss “keeper” method that he used on salmon fly floss bodies where there was no tag, tail, or ribbing to reinforce the floss body. His method forms a shell back of sorts that effectively locks in the rear of the body, which if not done, would not be stable or durable at all. This is the same method that I explained in my first DVD, Tying Classic Wet Flies, 2004, when tying in floss tags. On this Lady Killer, there is a short section of red floss tied in on top of the body with a pinch wrap after setting the tail and attaching the ribbing, and before winding to the head to tie in the body floss. When the body construction begins, two wraps of the body floss, four strands used here, are made, and then the “keeper” is pulled forward and tied in and wrapped over with the body floss. This provides greater reinforcement to the rear of the body and binds in every last strand of floss. And why do I bother to do this, you ask? Start looking real close at macros of flies with floss bodies on line. Even some of my work in Forgotten Flies, which was completed thirteen years ago. Even a tinsel ribbing does not effectively secure every last strand of floss. You can often see a few to many strands that slipped out of place at the end of the bodies. I know, it’s a detail, but “attention to detail is what separates good and other classifications of really ‘well-tied flies’ and excellently tied flies. Been saying that in my classes for over a decade. This little “body keeper” technique adds another 25% to 30% of the hook shank circumference where the floss gets locked into place beyond that provided by the ribbing alone. I also believe that as fly tiers, we should never be content with less than the best of our capability. And, this technique does increase the durability of the pattern for fishing flies. 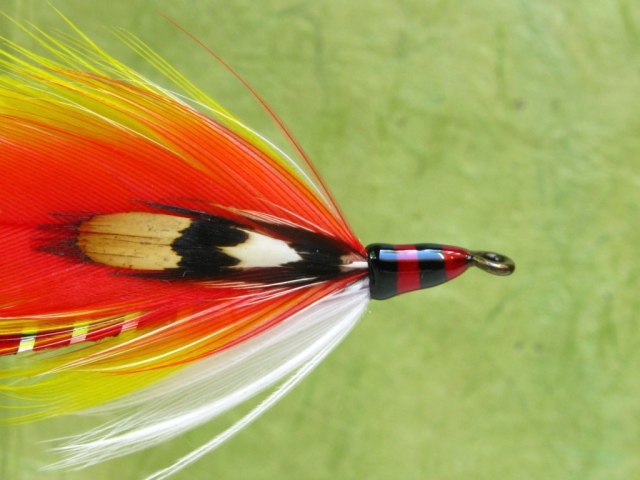 Lady Killer – head macro. In replicating Carrie Stevens (or other tiers original patterns) I believe we should tie with attention to detail. Personally, for me when tying Carrie’s patterns, that means that I replicate her style of elongated heads. My cement used here is Sally Hansen’s Hard As Nails, and nothing else. About 5 – 6 coats. I used to favor the Wapsi Gloss Coat, but discovered that when thinned with regular lacquer thinner, the heads get a malignant-looking grayish ‘blight’ on them, which developed about 8 to 10 weeks later. Not good. I thought using the Wapsi Gloss Coat Thinner would solve the problem, but no. The heads still went blotchy-gray after a couple months. Unacceptable. I do love Wapsi Gloss Coat for any head that will be finished off with Black Pro Lak, because one application of that cures the disease. Note: the jungle cock nail was repaired on the rear side with Flexament. The splits are still visible, but they are bound together.

I have already explained in my other blog posts why I am replicating Carrie’s banded heads. I did it for a little while in the mid-1980’s and then stopped and did not do it for over 20 years. I started doing it on a few Gray Ghosts that I tied up for collector’s packages. Then in a conversation with another tier last summer we discussed this and at that time I decided I would once again begin using Carrie Steven’s banding method to finish her patterns that I tie. Initially I was using colored cements and nail polish. Then I developed my own method of using only the tying thread to accomplish the bands. Fly tiers do not normally make substitutions on other pattern ingredients and still consider the dressing complete to the original specifications. I believe her head bands are part of her specific pattern recipe. And as detail-oriented as we tiers often are, I do not believe this infringes on her signature. Carrie’s sister, Elizabeth Duley, duplicated the banding when tying her sister’s patterns. Wendell Folkins of Tamworth, New Hampshire, who bought Carrie’s business in December 1953, was expected by Carrie to continue using her banding method, which he did. This is something that Carrie specifically, not randomly, integrated into her patterns.

I will be developing and expanding my Carrie Stevens Pattern Dictionary as time passes. I will integrate existing Carrie Stevens streamer patterns on my blog into this Category. This will take some time, so please bear with me. For now, this is the first entry and eventually, if you use the search tab, you’ll be able to locate any post in the Category. I want to try and keep the Carrie Stevens Streamer Pattern Dictionary limited to photos of flies, recipes, fishing experiences, and tutorials. Thanks for your support everyone!