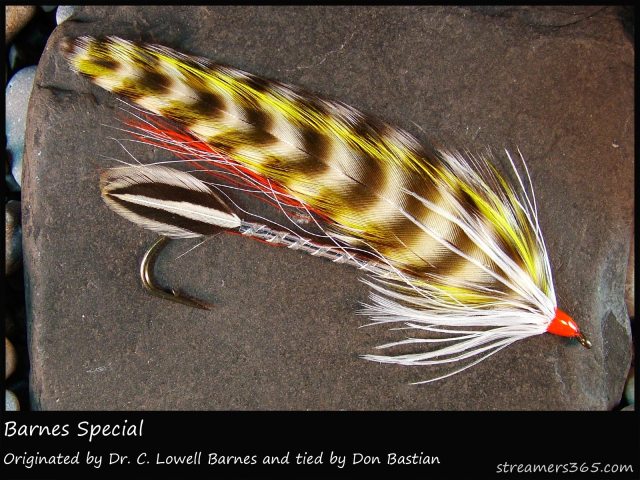 Notes: The Barnes Special is an adaptation from a streamer called the Hurricane (aka the Wonder) created by Fred Fowler. The Barnes includes a yellow hackle, a change from a peacock sword throat to a wrapped white hackle and a change of head color from the Hurricane, from black to red. Barnes was a guide in the Sebago Lake area and was known to examine the stomach contents of his catches. The Barnes Special is one of the most popular eastern streamers and is credited with the capture of thousands of salmon. It is said to be particularly effective when trolled in the spring. The Hurricane will be featured in the project later in the year.

Below follows a short bio that I copied from the site and expanded as well. This is a little update since most folks recognize my fly tying achievements in the classic wet fly genera.  I have a pretty extensive background and experience in streamers and bucktails as well. I love tying and fishing streamers and bucktails, and I also love the history of streamers about as much as I love the same aspects of wet flies.

I was born and have lived in Pennsylvania all my life. I started fishing at about the same time I learned to walk. It must have been that way, because I can’t remember ever not fishing. I have been tying flies and fly fishing since 1964. I have taught fly tying classes since 1987, have 16 years guiding experience, and have been operating my business, Bastian’s Angling Specialties since 1983.

I was tying the Gray Ghost, Black Ghost, Light and Dark Edson Tigers, Warden’s Worry, Bumble Puppy, Black-Nosed Dace, Mickey Finn and other patterns, and catching trout on them in local streams – Lycoming Creek, Gray’s Run, and Slate Run, while I was still in high school in the late 1960’s. New England and Rangeley style streamers have been a part of my fly tying passion and interest since the mid-1980’s when I first bought a copy of Joseph Bates’s book, Streamer Fly Tying and Fishing.

My first-ever slide program was presented in October 1987 – and was on the subject of history, origins, and use of predominantly New England streamers. This program was a photographic review on a few dozen patterns selected from Bate’s streamer book.

I have approximately 265 stream and bucktail patterns published in the 1999 book, Forgotten Flies. The styles of these patterns cover a wide-range of styles – single hook patterns, tandems, traditional featherwing streamers and bucktails, the entire series of Keith Fulsher’s Thunder Creek Minnow patterns, Joe Brook’s Blonde series of saltwater bucktails, and the entire “Tiger”  series of bucktails originated by Portland, Maine, fly tier Bill Edson, for which his authentic brass eyes were provided to me for the purpose. That was cool.

One of my DVD’s is titled, Traditional Streamers and Bucktails, August 2007. Five of the six patterns in it were originated in Maine. If you are interested in purchasing a signed copy, here is the permalink to the ordering page on MyFlies.com:

All the orders placed on MyFlies.com are received directly by me, processed, and shipped by me. Custom and personalized attention is given to all orders.

Thanks Darren, for the photo and for your permission to use it. For more information on Streamers.365 please visit the site.

Here is one of my file photos of the Barnes Special. There’s nothing wrong with your eyes; it’s a a double shot.

One of these flies is the same one Darren posted, the other was sent to Kevin McKay for the free drawing on his site: http://www.maineflyfish.com/index.php/index.html

A pair of Barnes Special Streamers

PS: I was supposed to head to Vermont for some fishing today, but I had some personal matters to attend to. But tomorrow, I’m on my way!

I had a great time yesterday at The Mayfly Club Event at The Riverside Cafe in Horton, New York. Great food, beverages, and camaderie with new and old friends!