Continuing with the posting of my original streamers from Streamers365.com, I present the Committee, a fly with a somewhat unique history of creation.

Back in the early 1990’s my good friend Rick Whorwood of Stoney Creek, Ontario, was getting interested in tying full-dress salmon flies. At the time he got this idea to bring some instructors into his home for classes. They were two full days of class, held in his garage with twelve students. On two occasions I sat in on these sessions. The first instructor was Rob Solo, of Newfoundland, and the second was Bob Veverka, of Vermont. These salmon fly lessons played a role in the creation of the Committee as far as my component selections.

A few friends and I had been making annual September treks to the Moosehead Lake region of Maine since 1986,where we hooked up and fished with my brother, Larry, who resides in New Gloucester, Maine. Starting in late August into September before departure, we would get together once a week at someone’s home and tie flies. Not everyone in these sessions was going to Maine, but they also attended for the fun and camaraderie.

One night, my friend Joe Radley and I were having dinner at a bar before the evening session. We came up with this idea to create a fly “by committee.” How this would go, was we took all the components of a streamer, wrote them on separate slips of paper, which would then be placed in a hat. Once the slips were drawn, each person was required to write their component suggestion on the paper without any discussion among anyone else. The Committee developed sight unseen by its contributors, being passed from vise to vise as it evolved. Besides Joe and me, the originators include Truman McMullan, Dave Rothrock Sr., and Dave Rothrock, Jr. I can only recall that I ended up getting the butt and ribbing, that is why, drawing on my recent salmon fly tying lessons, I chose a red chenille butt and the double ribbing of flat silver tinsel backed by fine oval gold tinsel.

On the trip to Moosehead that year, we all had a few Committees to toss around, and it proved to be a pattern that successfully took trout and salmon from the Roach, Moose, and Kennebec Rivers.

Wing:              Sparse red bucktail to end of tail over which are four bright orange hackles

Shoulder:     Brown-edged black and tan “church windows” from the back of a cock ring-necked pheasant

Catching up on another posting from Streamers365.com – September 24th, 2012 -I was fishing in Maine back on that date, I thought I would add the High Roller to the list of my original streamer patterns posted here. This has the same history of the Grizzly Orange as far as time and origin, but it’s a couple years older, and was field-tested. I created it for fishing in Maine in the mid-1990’s, (caught fish on it), then I added it to my list when I was working on the streamers for Forgotten Flies. 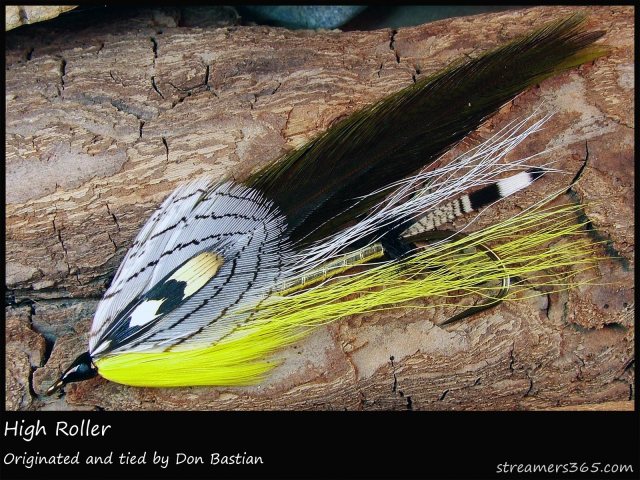 I would like to credit Mike Boyer for the yellow throat. The original version did not possess this, but he posted my pattern on Classic Fly Tying Forum.com and added it to the pattern. I liked that myself, and added the yellow throat hackle to my Streamers365.com version of the High Roller. Thanks Mike!

Belly:               Four strands of peacock herl followed by sparse yellow bucktail, both as long as the wing

This pattern was first published in Forgotten Flies in the chapter Checklist of Streamers and Bucktails. This pattern has been fished on the Roach River in Maine, and has hooked brook trout and salmon.

This streamer was posted on Streamers365.com on October 16th, 2012. It is an original streamer pattern that I created back in the spring of 1998 when I was tying what ended up being two-hundred-fifty-plus streamer and bucktail patterns for my involvement in the book, Forgotten Flies and the chapter titled, Checklist of Streamers and Bucktails. What a fun time, and wonderful opportunity to expand my range and diversity of tying streamers and bucktails. I enjoyed the challenges of tying these flies, such as the entire series of Keith Fulsher’s Thunder Creek minnow patterns; Joe Brook’s Blonde series, Bob Bibeau’s sparsely-dressed, multi-layered bucktail streamers that were created for Maine’s Sebago Lake, and a fair number of tandem streamers, new for me at the time. Forgotten Flies is where the Grizzly Orange streamer was initially published. 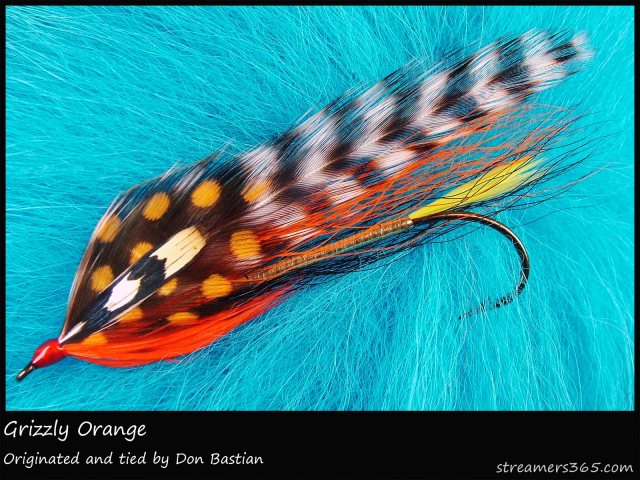 Wing:              Medium bunch of orange bucktail to end of tail, over which are two dark grizzly saddle hackles extending slightly beyond end of tail

The creation of the Grizzly Orange began with a single component – orange-dyed guinea fowl. I had an urge to use them for shoulders on a streamer. Once that was determined, the additional ingredients of grizzly and orange were combined to produce this pattern. It was created in 1998. Thanks for the great photo, Darren!