I recently had an experience with two of my friends, a father and son, with whom I’ve hunted and fished for the last twenty-five (or more) years; Jeff and Trevor Young. Trev was only about 6 or 8 when Jeff started fishing with my good friend Truman and me back in the ’80’s. Fast-forward to present-day. Jeff and Trev came to my family cabin over the weekend of April 3rd – 5th for Spring opening and outdoor chores, such as raking the gravel that the snowplow pushed off the driveway into the yard back onto the driveway. Something I really don’t like to do, but it’s gotta be done. Thankfully, it is, with thanks to Jeff and Trev.

They also brought along the newest member of the family, Deuce, a Pit Bull Terrier, about nine or ten months old. He’s Trev’s dog, but lives with Jeff most of the time. He was picked up as a stray, with no collar, by Trev’s fiancee` Rachael, right before Thanksgiving. I wasn’t sure how he would get along with Abigail, my eleven-year old Cocker Spaniel. When they arrived, I was in the kitchen, making dinner, and I had a Classic Rock station playing rather loudly on the radio. Abigail, of course, being the chow-garbage hound that she is, was sitting patiently on the floor, watching and waiting for any tidbit or morsel of food to fall within her “pouncing perimeter.”

Abigail has gotten hard-of-hearing in her advanced age – thankfully I taught her sign commands from puppy age, so it’s been a relatively smooth transition to communicate with her. Neither Abigail nor me heard our guests arrive, nor did we hear the door open, and I was occupied with my dinner preparations. I was  making a creation of my own – a Chicken Enchilada Lasagna. It was good, too! All of a sudden I looked down and there is a Pit Bull, doing what dogs do – he was sniffing Abigail’s butt. And for about three seconds, she didn’t know it. When she realized something was different- probably her sense of smell kicking in – she turned around to see Deuce up close and real personal, and those two just sniffed each other, face-to-face.

It was interesting the rest of the weekend – Deuce actually allowed his elder companion to be “top dog.” He was very interested in playing with her, but Abigail, not so much. They got along great. What is surprising, as in, you never know about life and dogs, is not so much about the dogs, but a couple things for me. First, I never thought my dog would or could get along with a Pit Bull, and for sure, I never thought I would be holding a Pit Bull on my lap. Even though he’s not actually a lapdog – he’s too big, but try telling Deuce that. Deuce is atypical for the Pit Bull stereotype. He’s a big baby, a real peach of a dog. Well-behaved, except for the fact that I think at fifty-seven pounds, he’s a tad too big for a lap or furniture dog, but that’s just me. And he doesn’t wait for you to command him to come onto the couch. He just does it, which can create a problem if you’ve just sat down with a hot cup of coffee. But that can be worked on. And as a man in a sitting position on a chair or sofa, one has to be slightly concerned with where Deuce places his big feet when he decides to join you. Here are a couple pictures: 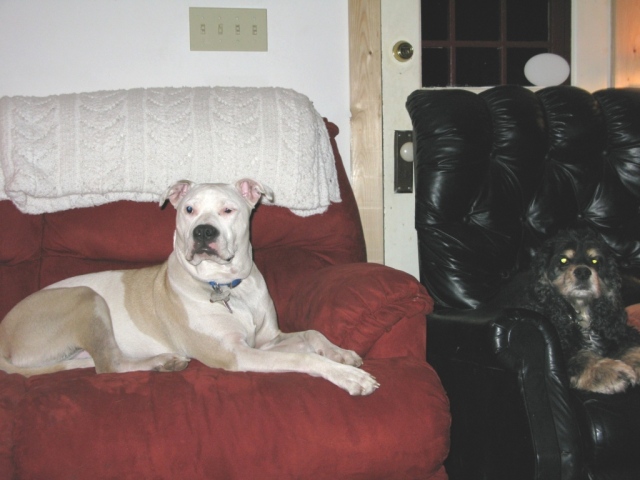 The Big Surprise! I’m holding a Pit Bull on my lap. Abigail could care less…

Humans can learn a lot from dogs.