I recently spent some time visiting and fishing with my friend Jack, who lives in Bel Air, Maryland. The original intent for my visit was for me to hit the Hickory Shad run on Deer Creek, but aside from getting some fish the first two nights on April 24th and 25th, the shad run had pretty much fizzled out.  Nevertheless we still had a great time. I also traveled to Budd Lake, New Jersey, on Saturday April 27th to tie flies and demonstrate at the Crossroads Angling Auction and Antique Tackle Show. For me the highlight of the day was when Hoagy Carmichael, bamboo rod builder and son of Hoagy Carmichael – songwriter, singer, pianist, composer, actor, singer, bandleader; admired and bought some of my extended body Green Drake Coffin flies and Spinner patterns. Hoagy Carmichael, the elder, is best known for composing the music for “Stardust“, “Georgia on My Mind“, “The Nearness of You“, and “Heart and Soul“, four of the most-recorded American songs of all time. His son has been part of the bamboo rod building heritage for many years. It was a thrill for me to meet him, especially since I have some of his father’s music on CD’s. See:   https://donbastianwetflies.wordpress.com/2013/04/22/bxb-green-drake-coffin-fly/

One afternoon Jack and I went to the lower western side access below the Conowingo Dam on the Susquehanna River, just to see the sights. Within the first five minutes, we saw a group of ten mature bald eagles soaring about 1500 feet above the river, all winging on the air currents in a fairly compact group. Other eagles could be seen at lower elevations, and there were several flying about across the river, close to a mile wide at that point. Additionally there were ospreys, cormorants, ducks, and numerous great blue herons. In fact, that part of Maryland has more herons in one area than I’d ever seen before. One night on Deer Creek while we were fishing, a group, or flock, of nine herons flew over at tree top level. Along the creek, they were always stationed in the riffs and pocket water, waiting patiently while hunting the shad or any other hapless fish that got too close to them. There would be easily upwards of a dozen to twenty or more herons on watch in a couple sections of the stream. Here’s some photos I took during my visit: 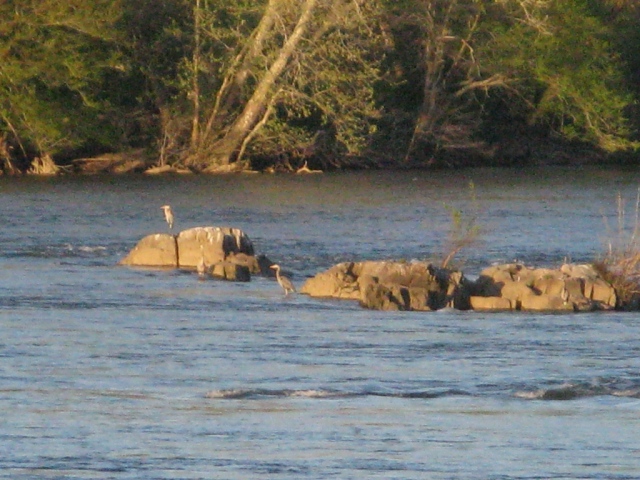 Great blue herons on the Susquehanna River. How many do you see? The photo was taken with my zoom lens at 24x; these birds are a half-mile away. With no tripod, I rested the camera on the railing. 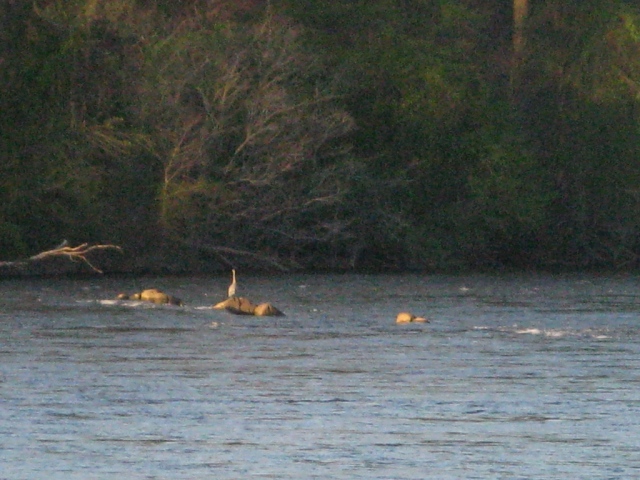 One night on Deer Creek, Maryland, the hunter waits.

Here is a great blue heron male in full breeding plumage, displaying those long spey hackles that we would love to tie flies with, but can’t because it’s illegal.

Bald eagle nest along the road to Deer Creek. The young eagle’s head can be seen in the nest.

While we watched, the parent flew from the nest and perched on a nearby limb. 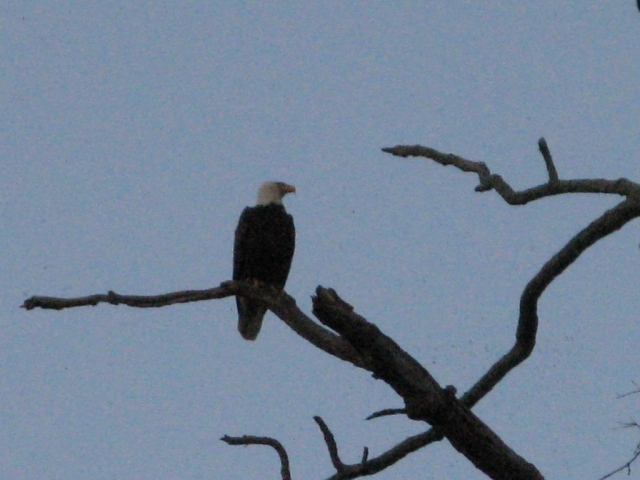 According to my host this particular eagle nest has been here for almost ten years.

We also fished Muddy Creek in southern Pennsylvania. I’ll post those photos separately. I hope you enjoyed these pictures of “professional fishermen.”