Here are some images:

Components listed in order of application to hook:

1) Start thread on hook, lay thread base for wing placement on location 1/3 distance behind hook eye.

2) Place E. P. Fibers for wing (these need to be sized / bunched to the hook / fly size ahead of time), on hook shank and using a pinch wrap, make three or four wraps in place to lash them to the hook. Then make one wrap in front of and one wrap behind the fibers.

3) Grasp the wing fibers, pull them up (or down – see my Parachute Adams tying post), and post around the base of the fibers until the wing is gathered together.

4) Attach the hackle to the base of the wing post. Be sure to clip the barbs from the stem at the tie-in point, rather than stripping them off.

5) Wind to hook point, attach Microfibetts. See the Hendrickson / Red Quill Parachute pattern post for the method to divide these fibers. Four figure-eight wraps are used to divide the fibers after you flare them out with your left hand index finger and thumb.

7) Apply dubbing to thorax, move tying thread to back of head, not hook eye. Ideally you want to tie the hackle off slightly behind the hook eye.

8) Wind hackle counter-clockwise to avoid trapping fibers when you finish it off. Again, see the Parachute Adams and Hendrickson Parachute posts. 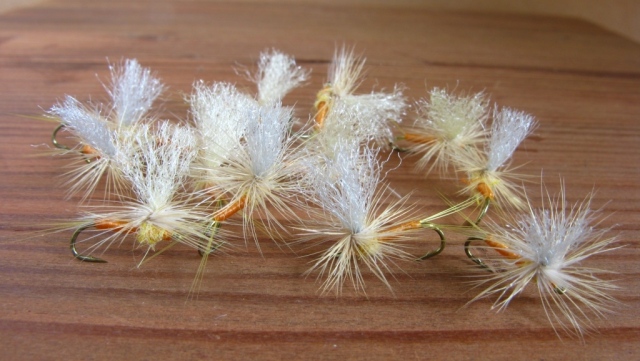 #16 Sulphur Parachute Duns, one dozen, tied and photographed by Don Bastian. You can see that I did a half-and-half mix of the wings, using both light dun and tan E. P. Fibers. This mixes it up just a bit to help fool more trout.

#16 Sulphur Thorax Parachute Dun, tied and photographed by Don Bastian. Notice the wing placement is a little closer to the hook point, in fact just about half-way between hook eye and point. Notice the abdominal ribbing, this is reverse-dubbed. See details below.

Hook: Standard dry fly hook, #14 to #18, in this case I used a straight eye Daiichi hook

Abdomen: Amber rabbit dubbing, wound over from rear to front with tying thread for ribbing

Thorax: Amber rabbit dubbing, or a slightly different color – sulphur orange or orange, could be used

Tying Instructions:
1) Set the wing and hackle as in the instructions above.

2) Ditto for the tail fibers

3) Advance thread to base of wing, apply dubbing, sparingly, the goal being to wind dubbed thread to the base of the tail, and run out of dubbing exactly at the end of the body. Then merely wind the tying thread right from the bobbin, up to the base of the wing, spacing it evenly to create ribs.

5) Wind the hackle counter-clockwise, lock in place with three or four thread wraps, trim off, build head and whip finish.

It is sometimes necessary to pull or clip guard hairs from the dubbing to tidy up the body. You could use Superfine Dubbing for the abdomen and rabbit for the thorax;  I chose to use rabbit fur on these flies.

One dozen #16 Sulphur Thorax Parachute Duns, tied and photographed by Don Bastian. Notice the split tails. This is highly imitative and also helps to stabilize the fly on the water.