The first time I ever saw or heard of the Golden Doctor wet fly was in Trout, 1938, by Ray Bergman. Along with the Silver Doctor it was an attractor pattern, and like the recently posted Fletcher wet fly, it has a three-color married tail. Between that fancy tail and the red and blue goose shoulder “splits” over the gray mallard wing, the Golden Doctor is another beautiful, yet little known classic wet fly. I recently discovered in doing research for my upcoming book, Favorite Fishing Flies – 1892, that the Golden Doctor is an older pattern than I previously realized. Reading through Favorite Flies and Their Histories, 1892, by Mary Orvis Marbury, I found some text where Mary mentions the Golden Doctor, so that means it dates at least to the early 1890’s. My guess is that the pattern is even older than that. I have always liked the Golden Doctor, it is another very beautiful wet fly. The color combinations of materials, the claret hackle and the red head, all make for a dashing pattern. Here is a photo and recipe for the Golden Doctor: 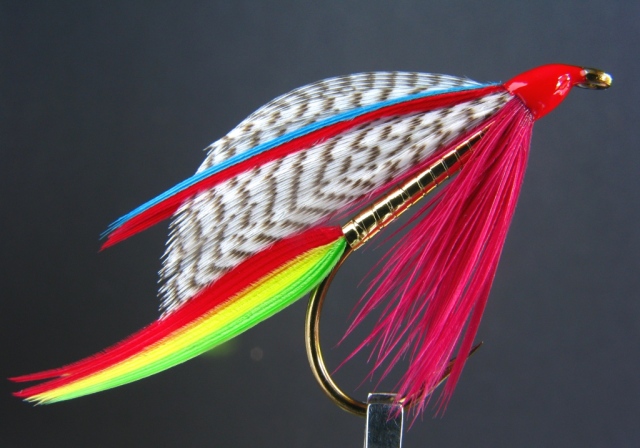 I used two full mallard flank feathers, paired, that is, a left and a right, and cut opposing sections from each feather, then I mounted the slips with the tip down, the wing curving downward in the traditional 19th century style. The claret hackle was wound from the tip of a schlappen feather, several turns. These feathers make great collar hackles, because the stems are so fine and flexible.

This is yet another pattern I confess to having never fished, but how could you not? Just look at it, the colors and form are perfect for brook trout and land-locked salmon.