The Bergman Fontinalis and the Fontinalis Fin were the first two brook trout fin wet fly patterns that I ever saw. I’ve written about this before, but at age twelve, my brother, Larry, and I fished with flies for the first time at a farm pond near our cabin in Tioga County, Pennsylvania. We caught lots of bluegills that day. I don’t recall what Larry used, but I fished a Yellow Sally. We became hooked on fly fishing, and when we returned to the farm house that served as our cabin, my dad showed me his copy of Trout. It’s a first edition, 9th printing of the 1938 classic. I still have it with his signature in ink inside the front cover, penciled notations in the margins with the pattern recipes in the back, like “sizes 8-10-12, good for brookies,” and I treasure it. I remember him saying it was a Christmas gift from my aunt and uncle.

Recently I tied up six classic wet flies as part of an order for a customer in Alberta, Canada. The Bergman Fontinalis posted here is the fourth pattern in that series, following the Parmacheene Belle, Fletcher, and Golden Doctor. I have five more classic wet flies, mostly Lake Fly patterns, that were tied last Wednesday, July 10th, during a private fly tying lesson with a student from south-eastern Pennsylvania. I have already photographed all those patterns and plan to post them here as well.

One highlight of Dave’s visit was that he wanted to learn how to fish wet flies. Since my area had received more rainfall and storms than normal, I informed him a week or so in advance that we’d have to play any fishing by ear. On Thursday morning July 11th, I took him over the hill to nearby Lycoming Creek. The water level was falling from recent thundershowers, and it was up quite a bit and off color, but you could see bottom in three feet of water. I gave Dave a crash-course in wet fly fishing, demonstrating casting, mending of line, tending of the drift, rod-tip position, and the hand-twist retrieve. I had rigged him up with two flies from his personal box; a #14 Partridge and Yellow in hand position, and a #12 Royal Coachman on the point, both tied on 3x tippet. He got a couple hits, and then after about a half hour, he hooked a trout. It turned out to be a decent brown, and the fish aggressively had taken the Royal Coachman. That made our day.

Getting back to the brook fin wet flies, there are six historic trout fin wet fly patterns that I am aware of; The Bergman Fontinalis, Fontinalis Fin, Brook Fin, Trout Fin, Brookie Fin, and Armstrong Fontinalis. I listed them in the order in which I personally learned of each pattern. Somewhere here in my blog archives there is an article dealing with those patterns. Three of these flies, the Bergman Fontinalis, Fontinalis Fin, and Armstrong Fontinalis were all created by Michigan angler and fly tier, Phil Armstrong. The Brook Fin was published in H. J. Noll’s Guide to Trout Flies; the Brookie Fin debuted in Helen Shaw’s, Flies for Fish and Fishermen: The Wet Flies, 1989; and the Trout Fin was presented in Ray Bergman’s final book, With Fly, Plug, and Bait, 1947, sent to him by fly tier Bert Quimby, of South Windham, Maine, as being a favored brook trout wet fly pattern for fishing in Maine. It does not list who created that fly, but there is a strong possibility it was originated by Quimby. The Armstrong Fontinalis was the last of these patterns that I learned about, a rather johnny-come-lately fly for me, around 2006. It was published in the book by William Blades, Fishing Flies and Fly Tying, 1951.

I have fished several of these patterns and caught trout and land-locked salmon on them in Maine, and also in a lake right here in Pennsylvania. As an aside, the Parmacheene Belle, according to originator Henry P. Wells’ writings, the brook trout fin was the concept for his fly design. I have always disagreed with that a bit, because there is no orange in his pattern, and that fly has a yellow body, there’s no yellow in a brook trout fin. Nevertheless, that pattern, the Kineo, and perhaps the King of the Woods could be considered as possible brook trout fin wet flies. Here is a photo of the Bergman Fontinalis: 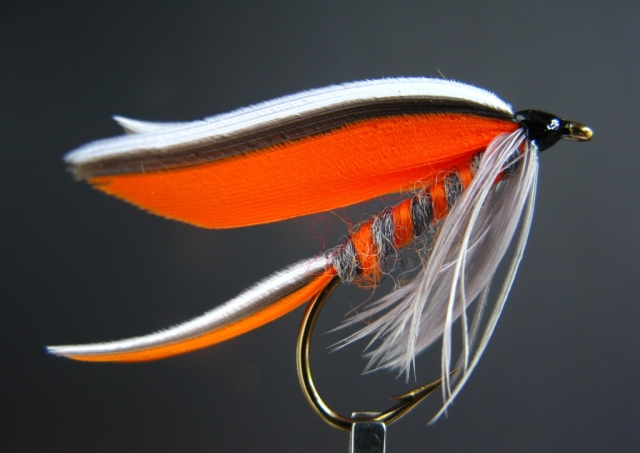 Tail: White, natural dark gray, married to and topping slightly wider section of orange, duck or goose quill may be used, in two sections (left and right side)

I used goose wing quill sections to make the tail and wing on this fly. Two barbs each of the white and gray for the tail; three barbs of orange. In the wing, I used three barbs each of white and gray. The natural dark gray quill sections are best obtained from Canada goose feathers. The hackle was tied as a throat, wound collar style, from the tip end of a gray schlappen feather. The ends of schlappen feathers make great wet fly hackles in larger hook sizes; the stems are very soft, supple, and very small in diameter, so they wrap nicely, and build no bulk at the tie-in point of the wing. The barb density is low so I generally make five to six wraps when using schlappen in this fashion.

The Bergman Fontinalis was obviously created to honor Ray Bergman. At the time Trout was published in 1938, Bergman was the preeminent angling author in the country, having served as angling editor of Outdoor Life magazine since 1934. It was a position he held for thirty-four years.

If you are looking for some enjoyable tying with a bit of a challenge, or want to experiment fishing with some new fly patterns, give the Bergman Fontinalis a try.