Fall fishing is a time of year when aquatic insect activity is minimal compared to the spring hatches. Therefore any hatch activity at all is usually met with anticipation and eagerness by the trout. Oftentimes windy weather and or rain will dislodge terrestrials from trees and bank-side vegetation; these include inchworms, ants, beetles, crickets, grasshoppers, bees, caterpillars, and spiders. This activity can be sporadic, heavier at some times than others from resulting conditions; consequently autumn dry fly fishing with terrestrial patterns can be effective. Beetles, ants, and my original Floating Inchworm pattern are my fall favorite terrestrial patterns. Among the buffet of terrestrial activity, there are still a few aquatic insect fall hatches that we anglers can take advantage of. One of my favorite mayflies in the spring, the Slate Drake, or Isonychia bicolor, also begins to emerge in the fall as the second brood of this species begins to hatch in mid-to-late September. Common in the Eastern United States on freestone waters, Slate Drakes can run almost to the end of October, often providing a near-exclusive aquatic insect match-the-hatch, dry fly fishing opportunity.

The first hatches of Isonychia bicolor in spring begin as early as mid-may and continue through July, sometimes sporadically, but there can be periods when these large, dark, slate-and-brown colored mayflies emerge in fairly heavy numbers, inciting trout to feed vigorously on the emergers and duns. The Slate Drake Spinner is also a significant element of this hatch and should not be overlooked. Typically these nymphs migrate to the shallows, but the nymphs living in large streams and rivers far from shore simply emerge from the water when their hatch time is ready.

A Slate Drake dry fly pattern in various styles is a good dry fly searching pattern whenever they are in season, but they are especially good in the fall when competition from other hatches is not as intense as the spring and early summer. Some traditional Slate Drake dun patterns include the White-gloved Howdy and Dun Variant. I like my BXB (Bastian Extended Body) Slate Drake Thorax Dun, Parachute, and Spinner patterns better than any other pattern style for this hatch. I’ve been fishing these patterns for nine years with wonderful success. Below is a photo of my BXB Slate Drake Thorax Dun pattern, still wet after it was removed from the jaw of an eighteen-inch brown that confidently took it on Big Pine Creek in May of 2012.

BXB Slate Drake Thorax Dun pattern. The hook is a size #14 but the fly is actually what would normally be considered a #8 or #10. The length of the pattern not including the tails is a good 3/4″ to 7/8″ in length. This fly was knotted to 4x tippet because I was fishing a fairly heavy riffle section, and I expected to encounter big trout. I did!

And here is a photo of that trout: 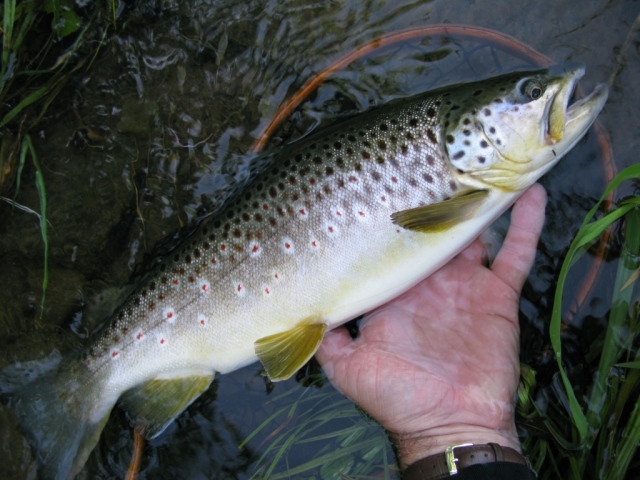 Here is a nineteen-inch brown I took fifteen minutes after the fish shown above:

This article started off with the intention that it would be only about Slate Drake nymphs, but it obviously morphed into a work to also include dry fly patterns. These insects are large, often requiring size #8 hooks. That size may sound too large to some anglers, but if you consider the actual body length of a Slate Drake dun and compare it to the shank length of a standard dry fly hook, that’s what you would need to use. Too many fly anglers dislike large drys; they don’t know what they are missing by not using them. Large imitative or attractor dry fly patterns like the Fan Wing Royal Coachman or Royal Wulff can really stir up some excitement on the water. I’ve read the words of some writers who say that the fall Slate Drakes are as small as a size #14, but I personally have never seen a Slate Drake that small in my life. I would not tie this pattern smaller than a size #12 standard hook length for fall fishing, and I have full confidence fishing my large extended body patterns that imitate the spring hatches of the Slate Drake. Though I generally dress them on a #14 Tiemco 2488 hook, these flies are the equivalent size compared to a standard dry fly pattern in a size #8 or #10. Some of the same line of thinking by other fly tiers and anglers expresses surprise at my devotion to size #14 Sulfur patterns for Spring Creek, when most other anglers fish #16’s. Heck, I’m just imitating the actual size of the bugs I see on the water. And it’s not that #16 Sulfur dry flies don’t take trout, but a larger fly is easier to see under most conditions, and floats better. Most importantly, it works!

Here are two similar Slate Drake nymph patterns; the first one was tied by my friend Bill Shuck, of Jarretsville, Maryland. Below that are photos of the same pattern that I tied. Bill made a couple modifications because he did not possess all the same materials that my recipe calls for.

This is essentially the Slate Drake nymph pattern conceived by my friend Dave Rothrock, but I made a few modifications to it in the interest of making it tie easier and faster.

Here’s a side view: 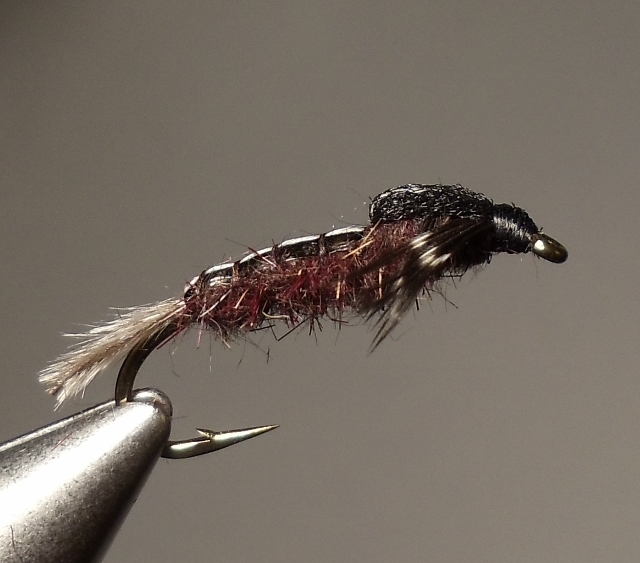 Side-view – note the bulge of the wing case profile. This is Dave Rothrock’s pattern design, with some tying modifications, but the use of poly yarn for the wing case is Dave’s accurate material usage to simulate the natural high wing-case profile of the Isonychia nymphs. This imitative design is a “strike-trigger” to the trout. Tied and photographed by Bill Shuck.

Here is Bill’s list of materials in order of tie-in:: 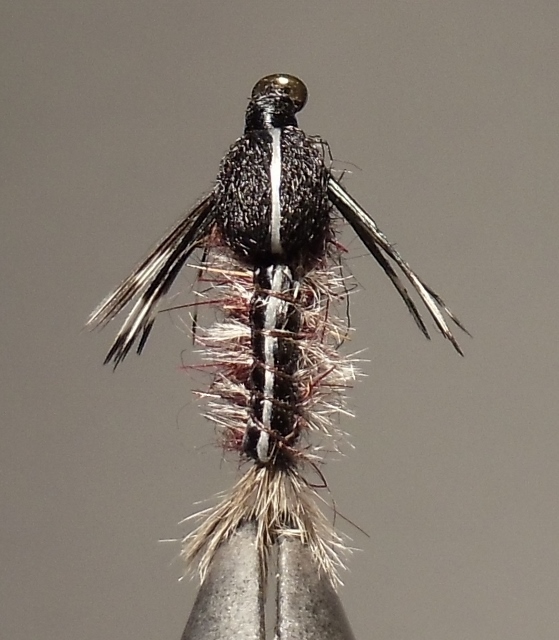 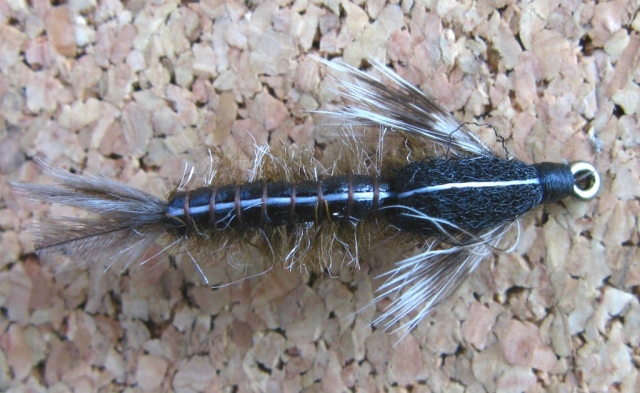 Any of these pattern can be ordered by visiting my product pages at MyFlies.com: http://www.myflies.com/BXB-Slate-Drake-Set-P741.aspx

or the Slate Drake Nymphs may be ordered by visiting my Custom Order page: http://www.myflies.com/Don-Bastians-Custom-Fly-Orders-P750.aspx

If you get a chance to venture out for some fall fishing, most streams in the Eastern United States have Isonychia populations – be prepared, and have some of these patterns to fish with.

I meant to include these photos yesterday when I wrote this post…the wordpress format was having “issues,” giving me technical difficulties, and I forgot. Here is a soft-hackle Slate Drake Flymph tied and photographed by Bill Shuck:

Here is the recipe for this pattern:

From Bill: “This was a pattern that I posted on the Flymphforum in April 2012. The vintage hook is one given to me be a friend in Virginia, and the European hare dubbing was dyed by another friend who lives in Holland, the same guy I hosted for two weeks this past spring and who gave me an excellent 5 wt. bamboo rod he made himself.

Nice that you got a bamboo rod for hosting your friend! Such a deal!

I close this with image of a half-dozen Slate Drake Nymphs: 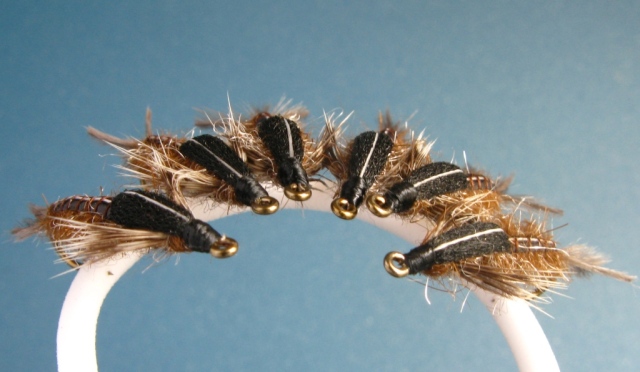 And one final shot, lined up in a row:

12 comments on “Slate Drakes – aka “Isonychias””