That would be me, not turning to salt, but tying some saltwater flies, specifically a palolo worm pattern for tarpon in the Florida Keys. Going back twenty years, and off and on since then, I have tied Clouser Minnows, Deceivers, and some original squid-type patterns for stripers and cold saltwater fish, and once did an order of some bonefish flies. But I have never tied tarpon flies, except for a handful of Stu Apte’s Tarpon Fly that was on the 1991 United States postage fishing fly stamp series. These all went into frames with the stamp.

This palolo worm pattern came about in a strange way. It seems a customer found the site www.MyFlies.com, and saw my Floating Inchworm pattern; here’s a pic of that for those of you who have not seen it: 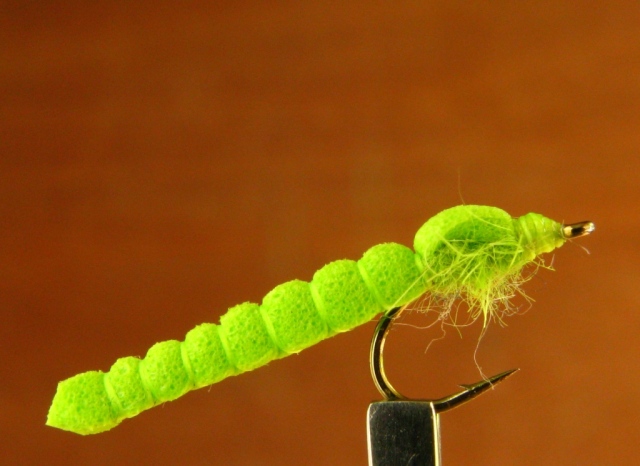 My original design, Floating Inchworm pattern. The hook is a #16 TMC 2488. This fly is a great late spring, all-summer, and into fall dry fly search pattern. When the hatches taper off trout turn to terrestrials, and this fly fits that need nicely.

So my customer saw this fly, and somehow thought I could perhaps adapt this design to a tarpon fly. Say what? I think of tarpon as these large, predatory fish that can bust up your tackle, not to mention wearing you out in the process of trying to land one.

The palolo worm is tropical and various species of them live in coral reefs around the world. In researching them I discovered the Samoans covet them as a delicacy. And they breed once a year, a night-time spectacle that lasts only a few hours. The annual spawn and harvest of these things is a ritual celebration in some places. I never thought that tarpon would eat something so small, yet I know big trout eat tiny midges, and grizzly bears eat little moths, and a two-hundred pound human will eat a single peanut, raisin, or one M&M, though the latter is hard to do. The reason why trout, tarpon, and grizzly bears eat small food items is that they can occur in large numbers, making the caloric intake worth the effort.

My customer explained to me that the palolo worm larva hatch in abundance, and they are about 2-1/2 to 2-5/8 inches long, and they do not undulate, but rather look like a stick moving in the water. They have small legs, sort of like those on a centipede, that move, but you can’t see these until you get close. My customer also explained that if the projected pattern would float or at least, sink slower than any other palolo worm patterns that it would work to his advantage.

I used closed-cell foam, 2mm, and doubled the cut section up to make the body. This image shows a finished worm body on a tube fly jig: 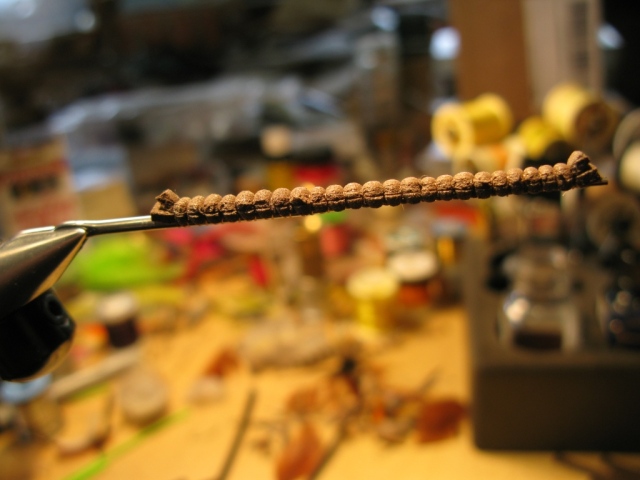 Original design, a palolo worm body on a tube fly jig. I later used a large-sized straighten-out paper clip because it had a uniform size diameter for the entire length of the body. I was initially working onto the tapered part of the jig.

I was using Wapsi Ultra-Thread brown in 6/0, but only because I had some. I really don’t care for that thread, it seems to flatten out and fray too easily. When that spool was used up I went to Danville 3/0 brown monocord. To illustrate how much thread these things used, I went through a full 50-yard spool of the monocord in a few hours, which reminded me of my commercial tying days, when I did the same thing, using an entire spool of monocord in a day, tying Wooly Buggers. Most tiers have no clue as to what that volume of tying is like. I also put a huge dent into the second spool of monocord until these were finished.

Here is a macro of the finished worm: 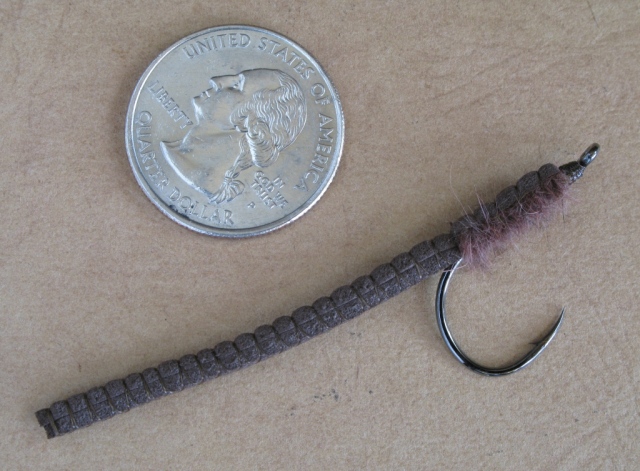 Don Bastian’s original design Palolo Worm pattern, the hook is an Owner 1/0 Mosquito Hook, #5377-111 Black Chrome. Bass Pro Shops carry these hooks, so I was fortunate to be able to order them from my local Bass Pro Outlet which is also Winner Hardware in Williamsport, Pennsylvania. If you have never tied on these hooks, let me tell you, they are excellent quality. And sharp as a needle.

The body section on the hook has a strip of foam pulled over the top like a nymph case; the ribbing is the tying thread made with my reverse-dubbing process, and the “legs” are the rabbit fur picked out and clipped just like when making a cress bug pattern. The color is a custom blended mix of brown rabbit that I have in a large ziploc bag; I can’t remember what is in it because I made it up about fifteen years ago and labeled it “Dark Sulfur Nymph.” Finding that when looking for the right color of dubbing to use on these worm, I thought, “perfect.” 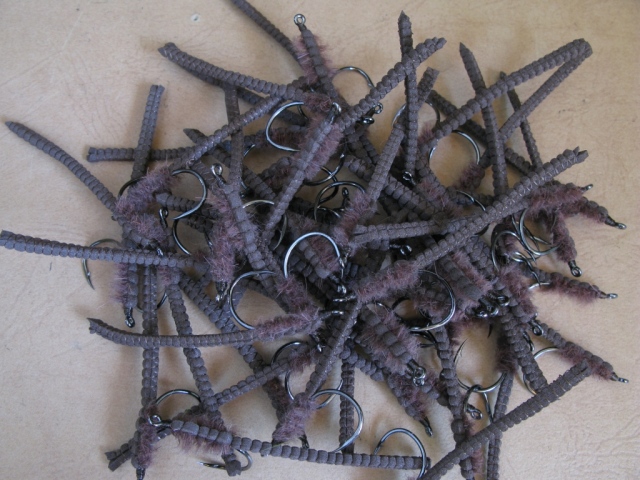 The entire lot in the order, fifty-four in all.

Each fly took me about six minutes to make, start to finish, of course I made all the bodies first, then began the process of lashing the abdomen to the hook, dubbing, and finishing the top segment with the tying thread ribbing.

I think they will work…but I’m relying on my customer who will soon be putting them to the test. I’m hoping for a Grand Slam with this design!