The Black Prince wet fly is an old pattern. It is shown on the Lake Flies in Favorite Flies and Their Histories, 1892, by Mary Orvis Marbury. It is also in Trout, 1938, by Ray Bergman. It was a popular pattern and has appeared in other publications as well. The Orvis version has a body made entirely of flat gold tinsel, while the later version in Trout sports a black floss body with a gold tinsel ribbing. Both have red tails, the version in Marbury’s book also has a jungle cock cheek. Hackle and wings on both versions are black, with natural black hackle being used on the original plate fly. I have a photo of that and recognized it as natural black; more of a dark charcoal color.

The reason I am inspired to post this article is that I recently completed an order of four dozen Black Prince wet flies, for a customer for fishing. She wanted them in sizes #12, #14, #16, and #18. The surprising part, not to me, but likely to many of you, is that my customer recently fished Pennsylvania’s famed and reportedly difficult to fish, at times anyway, Penn’s Creek. This is a stream where no stocking is done in a large section of Special Regulation water. The fish are almost all wild, stream-bred brown trout. I received her e-mail message today, as follows:

“ALL HAIL THE BLACK PRINCE!!! A short time ago I had a great afternoon on Penn’s Creek above Coburn with the Black Prince.  I would lay odds that is a fly that has not been seen around here in 50 years!!  And neither have the trout.”
My customer did not specify the size(s) she used, nor did she indicate how they were fished, but it’s a sure bet the flies were simply swung down-and-across. The hooks I used to supply her fishing fly order were modern hooks; I used Tiemco wet fly hooks – #3769. I prefer vintage and antique hooks for display and collector flies; and contemporary, high-carbon steel, mini-barb, chemically sharpened points to get the job done if the flies will be getting wet. Modern hooks are unquestionably better for fishing.
Here is a photo of the version of the Black Prince from Trout: 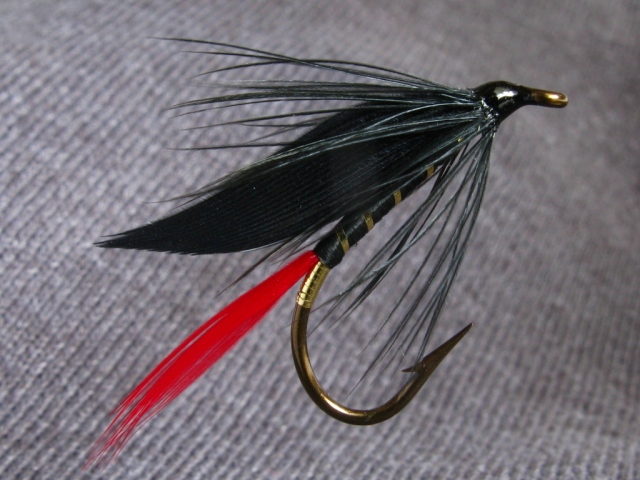 Black Prince – classic wet fly. The hook size is #6, Mustad vintage style No. 3399. The hackle on this fly was applied after setting the wing, using an old-fashioned technique. This method combines the winged wet with the effectiveness of a soft-hackle.

Tail: Scarlet hackle fibers of a section of red duck quill – may be two matching slips paired, or a single slip of duck or goose wing quill, as was done almost exclusively in the 1800’s

It is the tiers discretion to apply the hackle as a false or beard style hackle, or as a soft-hackle collar, which may be wound either before or after placing the wing.

If one desired to replicate the Orvis version of the Black Prince, use fine flat gold tinsel for the tag, make the body from medium flat gold tinsel, use a scarlet dyed quill section for the tail – traditionally in the 1800’s, scarlet ibis feathers were used for this – and add a jungle cock cheek.

Like so many classic wet flies, trout do not see them, and one ace-in-the-hole trick you can tuck up your sleeve is to hit the water with something different than what everyone else is fishing. How about the Black Prince?

Next on my customers custom order – the Grackle, another old classic pattern.