This is pretty cool. On Saturday November 22nd, at the 24th Annual International Fly Tying Symposium in Somerset, New Jersey, a man came to my table. He was intently eyeing my flies, moving back and forth, from one end of the table to the other. Finally the customer I was speaking to departed, so I devoted my time to this fellow. He was a fine looking man, and well dressed, casual. I’ll move ahead in this story for a moment, but after he left my table, my girlfriend, Mary, said, “That guy looks so familiar. I think he’s a newscaster.” Well…

The thing that was fascinating and interesting, was our conversation, which was driven by the questions he asked. This man knew full well, about Carrie Stevens, about Rangeley streamers, about the 19th-century B-Pond wet fly, and even Lucius A. Derby, for whom Carrie Stevens created a memorial streamer pattern in 1942, based on the B-Pond wet fly.

Our conversation covered details about the Masonic Lodge in Lowell, Massachusetts, named after Lucius A. Derby. According to the book, “Carrie Stevens: Maker of Rangeley Style Trout and Salmon Flies,” by Graydon and Leslie Hilyard, she made seventy-five of these streamers, which were presented to the Lodge members at the memorial service for Lucius A. Derby in 1942. He knew all about this.

He then asked about the “four known brook trout fin wet flies,” to which I replied, “Actually there are six historic trout fin patterns.” I had a Riker Mount with all six, so I got it out and showed the man. Brook Fin, Trout Fin, Brookie Fin, Bergman Fontinalis, Fontinalis Fin, and Armstrong Fontinalis. Michigan angler, fly caster and fly tier, Phil Armstrong, created the last three.

I also had my six original trout fin wet fly patterns; based on classic style, they are: Olive Trout Fin, Hemlock Trout Fin (previously published), and the Gold Trout Fin, Silver Trout Fin, Rainbow Fin, and Brown Trout Fin. There is one more original but I can’t think of it now.

He was there a good twenty minutes. The conversation was active, engaging, and never slowed for a minute. This man was knowledgeable beyond most of the fly tying / fly fishing folks who stop by my table. We also talked of Carrie Stevens fly tying. I had a Kelley’s Killer original, an image of the fly, tied by her, on my digital camera, so I got the camera out and showed that image to him as well. We discussed its components, differing greatly from the pattern in Hilyard’s book. It was one of those kind of exhilarating meetings that you remember.

We never did figure out who he was until we were at the bar that evening. Mary kept saying, he looked so familiar, but she could not remember his name. All of a sudden, I stated, I’m seeing an “image of the guy wearing a bow tie.” Kind of a page in my mind that just turned. She googled, “news correspondents who wear bow ties” – and BINGO!

Tucker Carlson – of Fox News. Formerly of CNN and MSNBC. Kind of made my day, after the fact. It was impressive that he was so knowledgeable about historical aspects of fly fishing and fly tying. Cool stuff!

Not too long ago a friend sent me this picture of a streamer. At first we were not sure what it was, though we were both pretty sure it was a Carrie Stevens tied fly. My friend sent the image to Don Palmer, of the Rangeley Outdoor Heritage Museum in Oquossoc, Maine, and he identified it as a Silver Doctor, though sans a few parts.

It’s pretty well beat, missing both cheeks, and the shoulder is gone as well on one side. The significant part of this image is that you can see evidence of Carrie’s use of cement / varnish, in the interior section of the wing. In addition to pre-assembling and cementing her wing components in advance; hackles, shoulders, and cheeks, she applied cement to the inner portion of the wing to help hold the fly together, and also used it to help set the wings. Here you go: 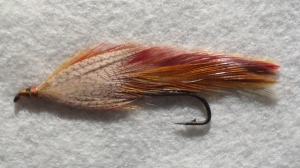 Silver Doctor Streamer, tied by Carrie Stevens. The jungle cock cheek is missing. The normally red head has oxidized and changed color from rusting of the hook.

And here is the revealing image that most of us never get to see:

The inside of a Carrie Stevens streamer fly – Silver Doctor, missing both the gray mallard shoulder and jungle cock cheek. Look closely, you can see residue of cement that held the shoulder in place. This also bears witness to how much cement she used, and how long of the stem portion of the feathers she applied it to. You can also see more of the throat fibers exposed, revealing a bit of her unique, self-taught, layering method of applying the throat to her flies. The copy of notes I have that were made by Austin S. Hogan, angling historian, and the first curator of the American Museum of Fly Fishing in Manchester, Vermont, reinforce all that I have described here.

Don’t forget, you can click on the pic, enlarge it, and be better able to view the cement residue. Remember, Carrie Stevens was a milliner by trade, so when she started tying flies in 1920 when she was already in her forties, it was only natural for her to apply what she learned in her trade to her new profession of fly tying.

The other thing that is noteworthy; you can also see the slight up-angle of the wing, the stems are not in perfect parallel alignment with the shank of the hook, as I’ve seen some tiers do, but are at a slight angle above the horizontal line of the hook shank. I mean to me, if you’re gonna tie Carrie Stevens patterns then I think they ought to be done as she did…that is, if you know the facts and have the ability to tie the fly in “true Rangeley Style.”

Thanks to my friend, Lance Allaire of Maine, for sending these pics to me.