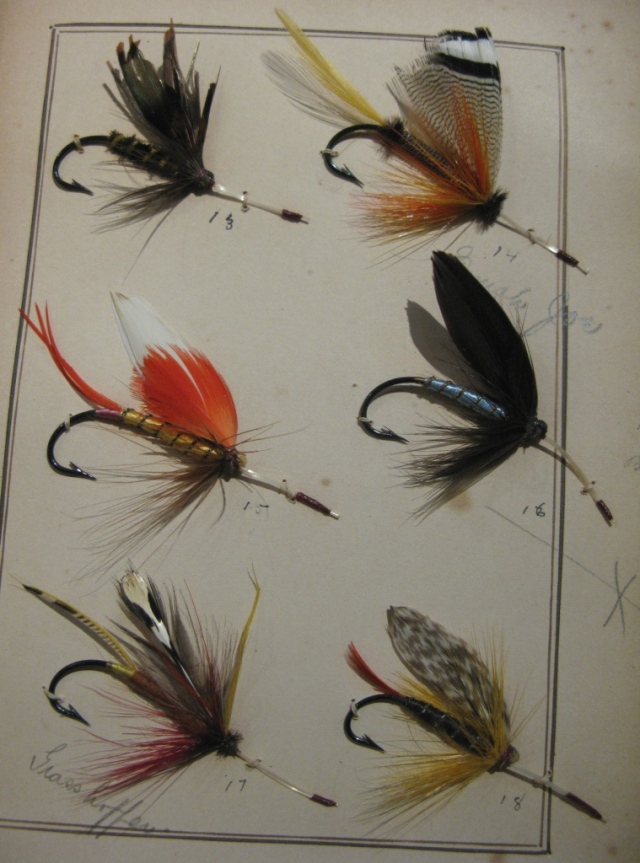 This is a photo I took of an actual mounted Plate of Lake Flies, taken back in October when I was at the American Museum of Fly Fishing in Manchester, Vermont (besides my visit to The Wantastiquet Lake Trout Club a.k.a. Fish in a Barrel Pond). I thought the flies looked familiar; when I returned home I checked my library. They are not from Mary Orvis Marbury’s 1892 book, Favorite Flies and Their Histories, but rather these patterns appeared in a book her father co-authored in 1883 with A. Nelson Cheney, Fishing With the Fly.

(Important: you can click and click again on each image to bring them up to full size).

These flies are 128 years old! I thought you all would enjoy seeing them. From upper left, going row by row, the patterns are: Bee, Tomah Joe, No Name, Blue Bottle, Grasshopper, and Canada.

Note the tail on the Tomah Joe is not golden pheasant crest, but a single yellow hackle feather. The wing on the Bee is pretty badly bug-damaged, but the recipe from Marbury’s book, one of a few patterns in her work that actually says what an ingredient is; Upper body feathers, paired, from a wild turkey providing a “peculiar burnished effect.” The quotation is from the text of Favorite Flies… 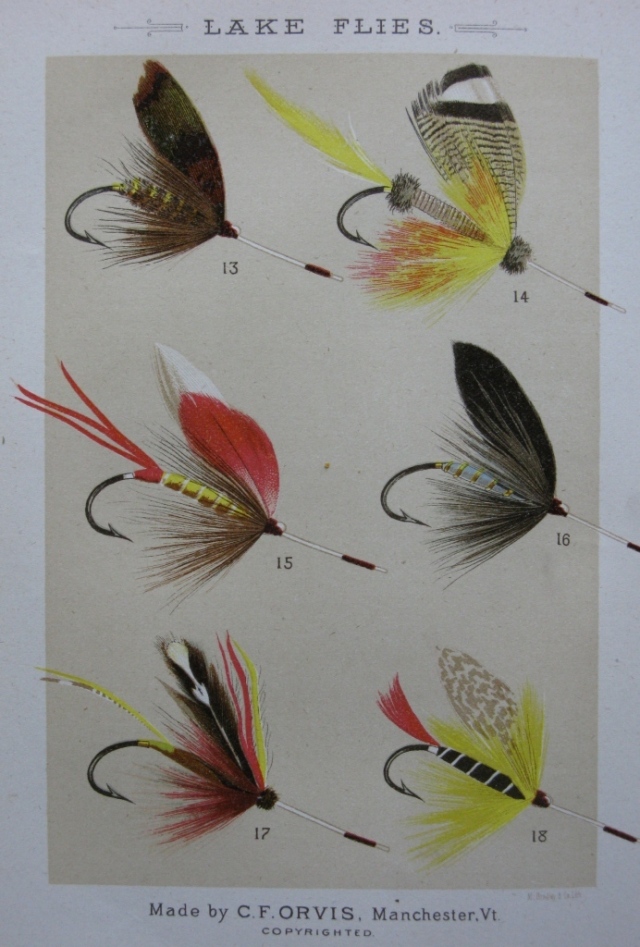 Here you can see the patterns from the book Lake Fly Plate image, as they were each hand-painted from the actual sample above, reproduced in the book, Fishing With the Fly, 1883.

The photo above is of the lithograph image from my first edition copy of the Charles Orvis book.

I apologize to my subscribers, but you have surely noticed that I have neglected my blog for a little more than three weeks now, sorry about that folks. I have been away for a while; I was at deer camp at my family cabin in Tioga County, Pennsylvania; not hunting so much as I was working on stuff, fly tying orders, letters, and my book project. Yes, some of you already know that I have a book contract for project titled: Favorite Fishing Flies – 1892. I took my computer to camp and worked – no internet – which was probably a good thing because offline, one can stay on task more efficiently, at least I can when I don’t have the pull of e-mails and so on. And yes, we did get some venison. I made a really wonderful Venison Shepard’s Pie one night, from scratch, using the meat and broth from bones utilized from a butchered deer (we do that ourselves) that we cooked down in a large kettle for about nine hours on an outdoor wood stove. It was delish! One of my friends told me I should publish that recipe.
The 19th century fly pattern book I am working on will be a tier-friendly volume. Myself and 24 other talented tiers are replicating all 291 patterns from Marbury’s book. Some of Paul Rossman’s exact flies that were published in Forgotten Flies will also appear in this new book. The idea for this book was simply that the recipes for Marbury’s patterns are not recorded anywhere with images or photos except for Forgotten Flies, and that volume is: expensive, out-of-print and consequently inaccessible to many tiers who want to tie these patterns, and at almost twelve pounds, it is not very tier friendly. It’s hard to find room on your tying bench for Forgotten Flies, as a reference, not to mention many of us have coffee, tea, scotch, red wine, or a beer nearby on tying occasions, and the risk of spills is, well, we never spill head cement do we? Not to mention the occasional slice of sharp cheese, bologna, sardines and what-have-you as a snack. That would not be good.

As my work has progressed since the initial announcement about the Marbury / Orvis flies book, the more research I do on these pattern recipes, the more variations & discrepancies I find from current known recipes. That in itself is very interesting. There is not a ton of totally different things, but there are some. The most glaring one just discovered, is that two patterns are switched in her book, and this error was never corrected in subsequent editions. Leonard’s 1950 book, Flies, while a great book and one I love, with many of the Marbury recipes recorded in it is, I am finding out, not-so-accurate with some details on many of these patterns. A few flies have incorrect material components numbering four or even five items.

My hope and goal is to present more accurate and updated information based on my research and verification when Favorite Fishing Flies – 1892 is published. Plus, I will have access to all the original flies that are mounted on mat boards, and in the possession of the American Museum of Fly Fishing in Manchester, Vermont. I plan to visit there this spring to take the photos; it will be a boon to study the original flies. I’ll be able to examine the flies, make notes, and certify any new information.

There is an older topic announcement here from November with more details of the book, the list of contributing tiers, and how to reserve your advance, limited edition copy.

Below are macro photos of each actual fly and of the fly plate image from my first-edition copy of the 1883 book. Note the penciled notations on the mat board – Mary Orvis was 25 at the time. It is most likely her handwriting; I have compared it to more than 140 other flies labeled in ink by her for an 1893 Orvis Display exhibited in Chicago, that is still on display in the Museum in Vermont.

Bee – Lake Fly. Note that despite the bug damage, there is still evidence of the “peculiar burnished effect” in the turkey feather wing. 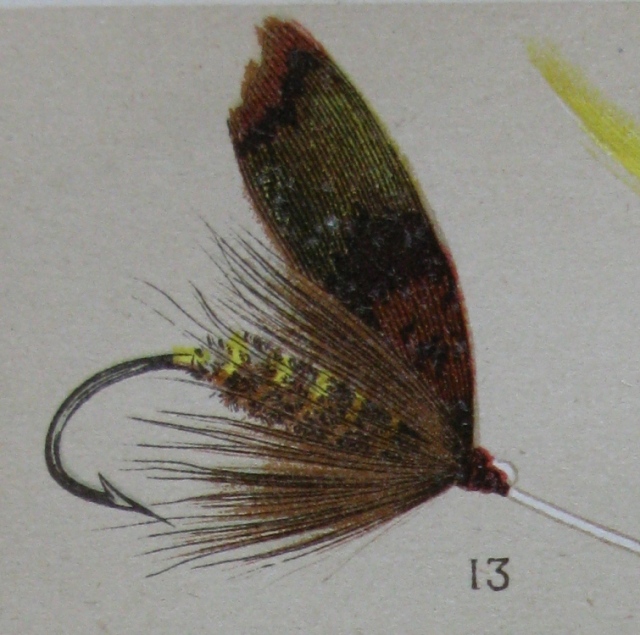 Bee – Lake Flies Color Plate Image. Look closely at what remains of the wing on the actual fly above, and compare it to the detail in the artist’s rendition of the feather markings of the wing. Quite accurate I’d say.

Tomah Joe – Lake Fly. Oval silver tinsel body, wound edge-to-edge, and an ostrich, not peacock herl butt on this one.

No Name – Lake Fly. Note the tarnished oval silver tinsel rib, and scarlet ibis tail and shoulder. The flat silver tinsel tag has tarnished into near oblivion, and the red floss portion has faded to a pinkish hue.

Blue Bottle – Lake Fly. The rib on this is what salmon tiers know as gold twist; oval tinsel in two strands. 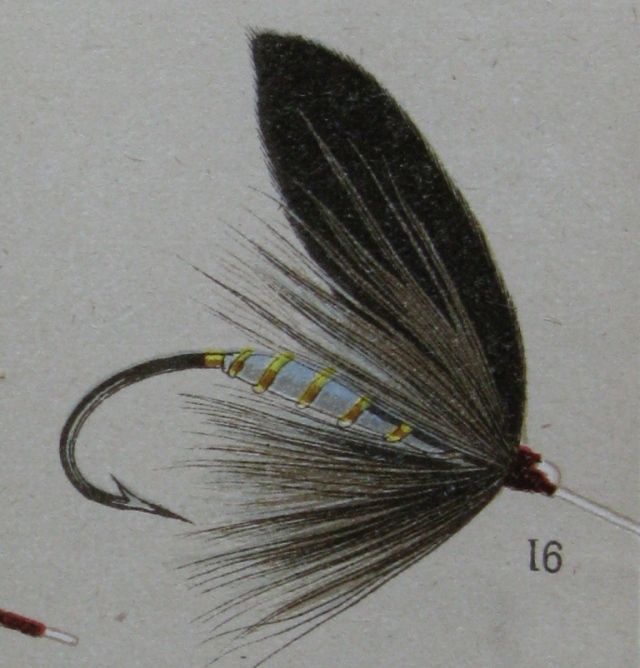 I thought since I had been absent here for so long that I would make my first new post something worthwhile for my readers to enjoy. The recipes for all these flies and almost 400 others will be in my book, Favorite Fishing Flies – 1892. I hope you all like these photos.