Sometime in 2011 I was fortunate to be invited to participate in the Streamers365.com Project, a year-long internet gallery devoted to featherwing streamer patterns. Darren MacEachern of Toronto, Canada, is the man behind the scenes with this project. I have placed Darren’s photos of my streamers here on my blog as they have appeared on Streamers365.com, but somehow I missed the Footer Special that was posted on April 19th:   http://streamers365.com/2012/04/110-footer-special/

The Footer Special on that day is presented by two tiers, Charlie Mann and myself. Here is Darren’s photo of the pattern:

The link to Streamers365.com above also presents a bit of the history on the pattern.

I need to get busy and write the story about the Friday night fly tying class I taught at L. L. Bean last March during their 3-day 100th Anniversary Spring Fishing Expo. Here is a nutshell account:

Bean’s conducts regular Friday evening fly tying classes in the Fishing Department of their Flagship Store in Freeport, Maine, during fall, winter, and spring. They normally present flies in their classes that are part of their packaged L. L. Bean Fly Tying Pattern kits. Since the same patterns were presented a couple years in a row, I suggested to Ed Maillet, Department Manager at the time of planning last November, to consider doing “something different.”

Ed agreed. His only request of me was to present a pattern that Bean’s would have the materials for tying in their stock. The Footer Special met these requirements, also it is a Maine streamer pattern, and was one of the streamers featured in my streamer DVD, Traditional Streamers and Bucktails. Little did I know that 2012 is the 50th Anniversary year of the creation of the Footer Special. The resulting Friday evening class turned out to be the best class Bean’s ever had in terms of the number of people present. Nick Sibilia, member of the Saco River Salmon Club in Biddeford, Maine, http://www.sacosalmon.com/ is a friend of David Footer and had informed David that I was tying his pattern at the class. While there were about 17 students, eight or ten members of the Footer family was present, including daughter Julie who has been David’s right-hand girl for many years in his taxidermy and art studio.

David Footer came by my display table at Bean’s on Saturday and I got to spend some time talking to him, and I also met his wife. On Sunday we had lunch together in the room provided by Bean’s for the Spring Fishing Expo guests and celebrities. It’s been a delight getting to know David; he is a very friendly, kind man. And talented. He trained under famous Maine taxidermist / artist Herbert Welch, originator of the famous Black Ghost streamer.

Including the Footer family members and additional spectators, there were about thirty-five people present at the class. Needless to say, Bean’s staff of retail and promotional employees were delighted by this unanticipated response. 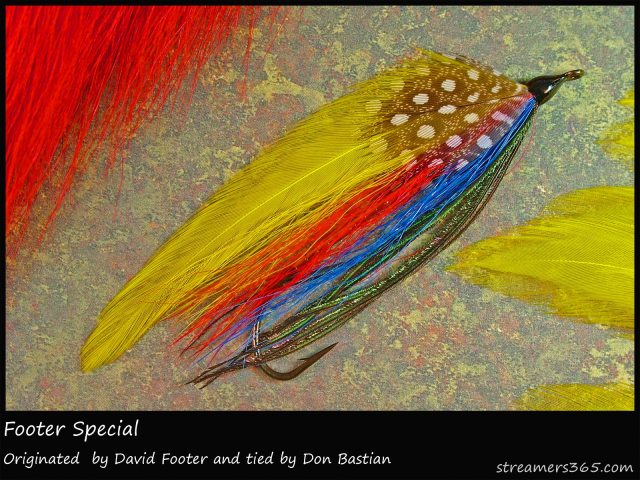 David’s creation of the Footer Special mirrors the fly designs of Maine Warden Supervisor, Joe Stickney, originator of the Supervisor – also one of my other patterns presented on Streamers 365.com:  http://streamers365.com/2012/01/20-supervisor/ and other streamer patterns including the famous Warden’s Worry and Lady Doctor. Joe Stickney and David Footer share the common creativity of fly pattern design, while neither of them tied flies. They created their patterns and had them dressed by friends who were fly tiers.

Here is a link to David Footer’s website:  http://davidfooter.com/

Finally part of the project of Streamers365.com is a monthly eBay auction of the streamers presented the previous month. Here is a link to my Footer Special, in case anyone is interested: http://www.ebay.com/itm/Footers-Special-by-Don-Bastian-Streamers-365-Cased-Rare-Fishing-Memorabilia-/140749019353?pt=LH_DefaultDomain_2&hash=item20c54b98d9

I tied two Footer Special streamers the night of the class, and presented them to David on Sunday at the L. L. Bean Spring Fishing Expo. I intend to write more on some of the details and post photos of those flies as well. Thanks for reading! 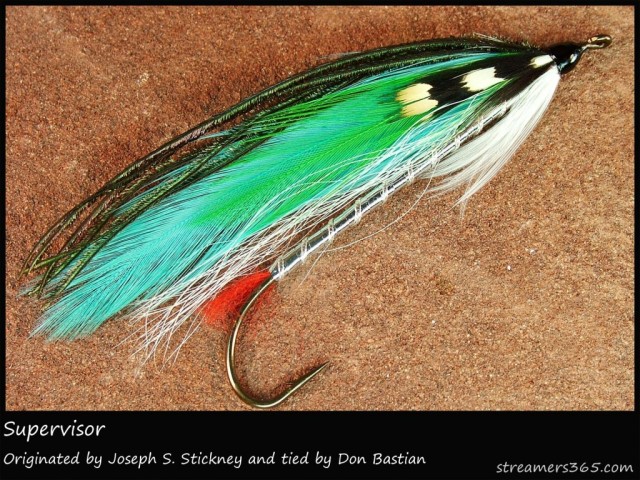 The Supervisor streamer was posted for the day on January 20th on the site, Streamers365.com.

Darren MacEachern, the driving force behind Streamers365.com took this photo of my Supervisor. This pattern is also included in my DVD, Traditional Streamers and Bucktails. To order a signed copy of this DVD, you may use this link direct to the item product page on MyFlies.com:

Convenient and secure online payment methods are available. The listed price includes shipping. The DVD is signed and shipped by me, so your will order receive my personal attention.